Benedict, born Joseph Ratzinger, died Dec. 31 at age 95, nearly a decade after abdicating the Papacy following a 9-year-tenure defined largely by the scandal involving the Catholic Church’s role in covering up for sexual abusers all over the world. Shortly after Benedict’s death was made public, Geller tweeted, “Homophobic pedophile protector and Hitler Youth alumnus dead at 95,” alongside a link to a news report.

A few days later Geller removed a reference to the publication from his Twitter bio, according to Fox News, and he now refers to his employment with Politico in past tense on his website.

“Most recently, I spent six and a half years covering cybersecurity for Politico,” Geller’s website reads, “where I mostly wrote about how the government protects U.S. computer networks from hackers.” 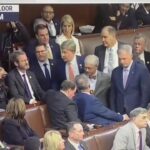 The Daily Beast confirmed Geller was no longer employed by Politico. The outlet’s spokesperson Brad Dayspring said Geller’s post was a “clear violation of our social media policy and was both inaccurate and offensive,” adding company policy violations are internally reviewed and subject to discipline “up to and including termination.”

As for the “inaccurate” nature of Geller’s tweet? First, Benedict, born in 1927, actually was “a Hitler Youth alumnus.” He joined when he turned 14, which in fairness was required by law in Germany at the time. He was later drafted into the German army but deserted shortly before the German defeat in 1945.

Benedict has also been credibly accused of multiple instances of covering up for pedophile priests, including the disturbing case of a German priest named Peter Hullermann, a serial molester of young boys. In 1981 Benedict, then Archbishop of Munich and Freising, personally intervened to ensure Hullermann was given therapy instead of punishment. Hullermann was convicted of sexually abusing minors in 1986 and then secretly permitted to continue serving as a priest; Hullerman continues to be ordained to this day.

In 1981 Benedict left Germany and moved to the Vatican, where he became the head of the Congregation for the Doctrine of the Faith, the Church organization that among other things oversees decisions involving punishment of priests for crimes such as pedophilia. It was in that capacity that he has been credibly accused of personally intervening to help Lawrence Murphy, a priest who molested more than 200 boys from the 1950s-1970s.

In 1996 Murphy faced a trial by Church authorities that could have resulted in his removal, but after he wrote a letter appealing to Benedict personally, the matter was dropped.

Benedict also bitterly opposed equality for LGBTQ people and once said that discriminating against homosexuals was “not unjust discrimination.” He also tried to blame gay people for the Catholic Church’s pedophile problem.