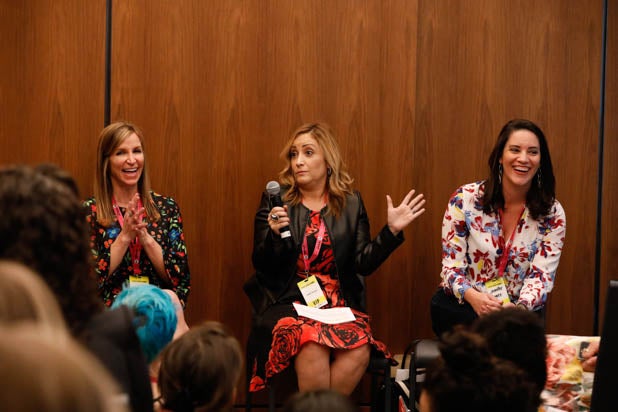 “Vida” writer, Tanya Saracho, was once cruelly informed by a network receptionist that she was selected for a show as “the diversity hire” — so recalled mitú president and co-founder Beatriz Acevedo at the Power Women Summit in downtown Los Angeles on Friday.

Saracho immediately approached her agent and moved onto another project within days, Acevedo said.

“I didn’t know that term existed until I talked to Tanya,” Acevedo said of “diversity hire,” a label that evokes imagery of the forced eating of vegetables, rather than something that has the potential to flourish. “The fact that there’s this quota, I know it comes from a good place in people’s hearts… but it’s not charity.”

Acevedo emphasized that diversity is “good business,” which has been reinforced at the box office and in TV Ratings time and again. The “Fast & Furious” franchise is just one example of a thriving franchise based on diverse characters. “Pose” on FX and “Empire” on Fox is another.

But Acevedo and panelists Lionsgate executive vice president Jen Hollingsworth and writer for TV series “Vida” Jenniffer Gómez were also concerned with diversity behind the camera.

Acevedo said women creatives and creatives of color tend to be invisible to Hollywood. “We alway hear about how there’s a problem in Hollywood to find us,” she said. “It’s a big problem, it’s a deep problem, but there’s some hope.”

Women and people of color gaining a seat at the decision-making table in Hollywood was one of the solutions the panelists defined. Gómez said that “Vida” is a show that has an all Latinx writing team and cast. The show also features writers and actors within the LGBTQ community.

Hollingsworth said more women-driven and representative narratives gained more popularity and made the most money within the past year. She said the Queen Latifah-led “Girls Trip” reached beyond the targeted female audience. The 2017 film, Hollingsworth said, was a well-told story that both men and women were able to laugh at.

“At Lionsgate specifically, that [female] audience is a focus for us… it’s a focus on telling female stories,” Hollingsworth said.

Another major topic at the panel was the need for mentorship to continue promoting diverse voices in Hollywood storytelling for generations to come. Hollingsworth said it was difficult for her to find a mentor that she could holistically look up to because men dominated the entertainment industry in the past.

“I think my strengths are in being a woman,” Hollingsworth said.

Additionally, Gómez said that she believes mentors have play a big part in making sure that people of color and women continue to have a seat at the table. Even if an up-and-coming woman creative of color doesn’t have the same level of professional experience as a white man — because she hasn’t been given the opportunity as easily — it’s about mentors allowing their mentees to prove themselves.

“You just need to take the risk,” Gómez said.

Anita Hill Vows to Do What the Government Won't: 'The Down and Dirty Work of Changing Culture' (Video)

Power Women Summit: “I have been on this path for 27 years and I will not retreat now,” Hill says

Anita Hill vowed Friday to do what she says the government won't: to embrace the "down an dirty work ofÂ changing culture" by fighting for gender equality and the end of sexual harassment. Hill's lack of faith in lawmakers is understandable: The Senate approved Clarence Thomas' nomination to the Supreme Court in 1991 despite her testimony that he sexually harassed her.Â She was disgusted to see another nominee accused of sexual misconduct, Brett Kavanaugh, confirmed to the court in September. "We at the commission, which is what I'm chairing this year, are about changing the cultures and environments that the entertainment industry works in," Hill said at TheWrap's Power Women Summit in Los Angeles on Friday. She leads theÂ Â Commission on Sexual Harassment and Advancing Equality in the Workplace, which is funded by some of the most powerful women in Hollywood. "We are about putting into place policies that will actually bring about changes immediately, that will allow opportunities for people to hear, set up systems where we can report complaints and know they were thoroughly vetted and investigated, not only in an impartial way but also in a way that's informed about knowledge of trauma... What we are trying to do is to create the kind of cultures where everybody takes responsibility for what's going on and ending sexual misconduct," she said. Hill added: "It can't all be placed upon the lapse of the people who are the most vulnerable and who are the targets of the misconduct. We must understand that everyone has a responsibility to end the awful and heinous behavior that so many people describe and we know exist." The summit gathered together 1,500 women in the entertainment and media industries. Hill said the commission includes studios, agencies, guilds, unions and academies, and that the commission's goal is to make sure employers understand the burden us on them to improve. "They need to understand that the problem isn't that we complain about sexual harassment, the problem is that sexual harassment and abuse exists. We have started with information gathering," she said. "We are not talking about that is going to make a lot of headlines.Â This is the down and dirty work of changing culture and putting in place rules and policies and practices that will last for generations -- we hope."

Hill became a national figure in 1991 when she accused U.S. Supreme Court nominee Clarence Thomas, who was her supervisor at the U.S. Department of Education and the Equal Employment Opportunity Commission, of sexual harassment. Hill said 27 years ago that Thomas sexually harassed her repeatedly when heÂ was her supervisor at the U.S. Department of Education and the Equal Employment Opportunity Commission. She felt a kinship with Christine Blasey Ford, who accused Kavanaugh of trying to rape her when they were in high school. "She spoke so eloquently and movingly not only for herself but for so many of us and especially for the 1 of 6 women -- those statistics don't cover all of us -- who have already been sexually assaulted or the 1 in 3 women age 18 to 24 who will become victims of assault," Hill said. "Unfortunately, she was met with the same kind of resistance and indifference that all of us feel when we step forward and tell the truth of our experience. It is discouraging and depressing, but rest assuredÂ I have been on this path for 27 years and I will not retreat now." Hill also spoke about equality in the workplace and in education, and said it is important that women can "live free of sexual violence." "We must make unequivocally clear, even if the government isn't prepared to protect women from sexual violence, we are," she told the crowd. "We will do it ourselves. We deserve to work in harassment-free workplaces, and we deserve to have an equal chance to display our very talents throughout these industries, and throughout workplaces all over. These are not privileges that should be limited to men -- these are rights we all have." She added: "Gender equality can't be parsed out, and people can't be partially equal. It's all or nothing. It has to be whole, it has to be complete, it had to be radical."

Before Hill took the stage, civil rights activist and founder of the #MeToo movement Tarana Burke took part in a tribute to sexual harassment and assault survivors alongside actress Mira Sorvino, who has accused Harvey Weinstein of sexual harassment and derailing her career. "The world needs to understand the life cycle of a survivor," Burke said. "I still cry uncomfortably at things, I'm still triggered, and that's just the reality. When the Dr. Ford testimony happened, people don't talk enough about what survival looks like. I have to get up every day to decide to survive. There are some days where I say, I can't do it today." She added, "It's not about being bold and brave -- it's about resilience. This is what we're doing -- we're bouncing back, every day." Sorvino, who said she wants to work with programs that focus on the youth so that young men growing up will not "engage in this misconduct," explained that "harassment is the gateway drug to sexual violence." Sorvino and Burke then welcomed women to the stage who have come forward about their abuse and harassment experiences. Jessica Barth, Melissa Schuman and Rosanna Arquette were among the women to step onto the stage. Just a few days before the historic midterm election, the focus of the summit is to achieve gender equity in Hollywood, with the theme, "The Road to 50/50 By 2020." The summit is the largest gathering ever assembled of the most influential women in entertainment and media, attended and supported by studios, news organizations and non-profits across the entertainment industry landscape. It is presented by the WrapWomen Foundation, a division of TheWrap News. Watch the full video of Anita Hill's address above.
View In Gallery