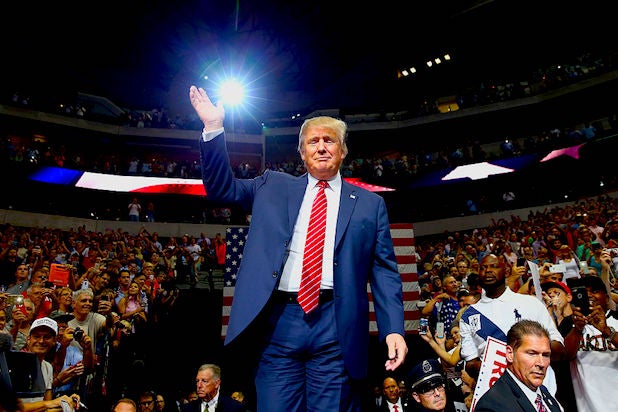 More than 50,000 people will descend on Cleveland for next week’s Republican National Convention to watch Donald Trump become the GOP’s official nominee for president.

In recent years, conventions have become little more than week-long infomercials as organizers plot a tightly-scripted event, all in an effort to present a picture perfect image of a party ready to govern.

But this year, the RNC has had a series of public hiccups while putting its big coronation bash together, from advertisers pulling out last minute and big name party speakers declining to participate or even show up.

Trump has pledged to liven things up in 2016, calling the last RNC “the most boring convention I’ve ever seen.” Ironically, he may deliver on that promise … though not for the reasons he was hoping.

Here are 5 things that could derail the RNC’s big week:

The Delegate battle
Delegates Unbound, a group urging delegates to “vote their conscience” at the convention, insists that delegates can vote for the candidate they want at the convention — even if that candidate isn’t Trump. On Thursday, a GOP committee voted down their demands. But the group has vowed to continue fighting, even if it means protesting on the convention floor.

“It could be very damaging to Trump because it could give ammunition to Hillary Clinton during the general election,” one GOP operative who spoke on the condition of anonymity, told TheWrap. “She could try and argue that Trump is incapable of running his own party let alone an entire country.”

Speakers going rogue
Trump has had a hard time convincing GOP’s top brass to speak at the RNC. Many big name republicans, including all the last four nominees have said they’re not planning on going. But even those who have agreed to speak could end up being a liability.

In 2012,, a longtime conservative had viewers scratching their heads as he spoke to an empty chair while addressing an “invisible” President Barack Obama. The media had a field day and nearly overshadowed the entire convention. In a 2013 book published titled “Double Down” Mark Halperin and John Heilemann claimed at least one senior strategist was so horrified by the spectacle that he promptly took himself off to vomit.

“You just don’t know what they might say that could end up being a debacle,” the GOP operative said. “Ted Cruz could just sneak in one of those back-handed compliments.”

Protesters galore
Concerns about violence outside the convention are at an all-time high after several of Trump’s speeches this year have gone out of control. Making matters worse, Ohio has a particularly wide stance on gun rights, allowing the open carrying of firearms. Among those planning on packing: The New Black Panthers Party. Members of the black-power movement will arm themselves at rallies leading up the convention. They say they’ll carry the guns in self-defense.

The Trump wildcard
Even though Trump has said he plans on using a teleprompter for his big speech on Thursday night, GOP strategists are worried he might go off script at any given time. Trump has been known to add his own commentary in the past, ad-libbing throughout.

“He could go off a tangent thinking he’s delivering a great speech when in fact he could be providing late-night hosts with some extra fodder,” the GOP operative said.

Veep revolt
Delegates who don’t like Trump could ostensibly try and contest his vice presidential nominee, Indiana Gov. Mike Pence. There is a precedent for this. In 1920, party leaders offered Wisconsin Sen. Irvine Lenroot as Warren Harding’s VP. But the choice was obstructed by delegates who wanted Massachusetts governor Calvin Coolidge. Delegates won and  Coolidge went on to succeed Harding as president after Harding’s premature death.