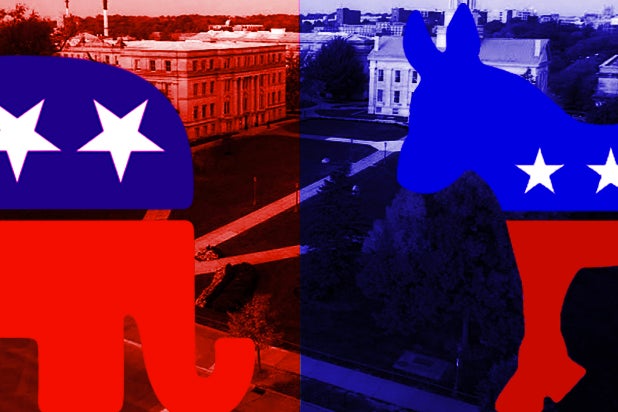 After winning the presidency and many statehouses across the classrooms, emboldened Republicans are turning their attention to one of the last bastions of liberalism: college classrooms. Some want an equal number of Democratic and Republican professors.

Republican Iowa state Sen. Mark Chelgren is proposing a bill that would “require partisan balance” at four Iowa state universities, based on the political party registration records of current professors and potential hires.

The bill would halt the hiring of Democratic professors at the four Iowa public universities until enough Republicans are hired, which would eventually put the two political parties in roughly equal proportion in the teaching ranks.

It is an article of faith in many conservative circles that left-leaning professors are trying to indoctrinate students into liberalism. The political party litmus test could create the same sort of dilemmas for professors as the communist witch hunt headed by Sen. Joseph McCarthy in the 1940s and 1950s, when public employees, including professors, were required to sign oaths stating that they were not members of the Communist Party.

In Hollywood, studios and other employers refused to hire hundreds of screenwriters, actors, directors, musicians, and others because they were believed to be communists or communist sympathizers.

“They want to have people of different thinking, different processes, different expertise. So this would fall right into category with what existing hiring practices are,” he told the Des Moines Register.

The requirement that public employees sign a loyalty oath was ruled unconstitutional by the Supreme Court in a 1967 case, Keyishian v. Regents of New York. The court said New York’s loyalty test requiring public university faculty members to pledge that they are not members of the Communist Party violated the First Amendment protection of the freedom of association.

Legal experts say that political litmus tests like the ones proposed in Iowa and North Carolina likely violate the First Amendment.

“There are implications to the First Amendment here that probably would render the bill unconstitutional,” said Joe Cohn, a lawyer and legislative and policy director at FIRE, a Philadelphia-based non-profit supporting free speech on college campuses. “We are continuing to do our research . . .  but my initial read is that you can’t have a political test for public job.”

Also Read: Twitter Turns on CNN's Van Jones After He Praises Trump: 'How Dare You Normalize Him'

University of Iowa English professor Loren Glass, a Democrat, told TheWrap he agrees that the “faculty should be ideologically diverse.” But he said it is unconstitutional to hire based on party registration. And he has another problem.

“The dominant ideology of the current Republican party is anti-intellectual in principle, and you cannot have scholars who don’t believe in evidence or scientific method,” Glass said.

Iowa State Sen. Herman C. Quirmbach, a Democrat and associate professor of Economics at Iowa State University, called the bill “wackadoodle” and “unenforceable” because some job candidates hail from states where party registration is not publicly available as it is in Iowa.

But University of Iowa political science associate professor Timothy M. Hagle, a Republican, says the bills are “understandable in that Republican lawmakers correctly see universities as very liberal and would like to see more balance in them when they are public institutions.”

Hagle says the problem is that “one professor or another . . . goes on a left-wing rant in class or tries to censor conservative students in one way or another.”

“Universities are seen, in one way or another, as promoting a particular political agenda,” he added.

Hagle thinks the bill might violate the constitution’s Equal Protection clause and Iowa’s protection for individuals based on their “associational preference.” But he disagrees that the bill would violate the First Amendment, saying that a professor or professor candidate could simply register as a Republican “and then say whatever he or she wants” about politics.

Not so fast, says Cohn, the attorney for FIRE. He points to the Supreme Court’s decisions in Rutan v. Republican Party of Illinois and Elrod v. Burns, in which the court held that neither Republican nor Democrat officials could condition government jobs on affiliation with their own political party.

Chelgren, who did not respond to TheWrap’s questions about his bill’s constitutionality, is right that Iowa’s professors seem to lean left. According to a 2005 poll funded by conservative groups, 50 percent of university and college faculty members are self-identifying Democrats and 11 percent are Republicans.

Chelgren’s bill does not call for firing Democratic faculty members. Instead, he calls for collecting the Democratic and Republican registrations of current faculty members at the four Iowa state universities, then instituting a hiring plan that would bring Republican and Democratic professors within a ten percent ratio.

Faculty members not registered with the two majority parties would not be counted.

Chelgren says his bill would simply “balance” faculty based on party affiliation to allow students to “know publicly whether [a] professor is a Republican or Democrat or no-party affiliation,” so students “can expect their answers to be given in as honest a way possible. “

The governing board of the four Iowa state universities quickly announced its opposition to the bill. “The board expects our public universities to hire the most qualified faculty to teach our students, and we believe in diversity of thought,” spokesman Josh Lehman told TheWrap.

University of Iowa History Professor Katherine H. Tachau, Iowa chapter president of the American Association of University Professors, said she believes that the Iowa bill “overestimates the impact of a faculty member’s political views on their research and teaching.”

“Republicans haven’t even spent two full months in power at the Iowa Statehouse and they’re already trying to impose a one-party rule in the state in perpetuity. You’re a registered Democrat? You’re banned from getting a job,” he wrote.

View In Gallery
BIO Susan Seager
Susan Seager is a Los Angeles First Amendment attorney, an adjunct professor teaching media law and intellectual property at the University of Southern California, and columnist for Dan Abrams’ Law Newz. Before starting her own private practice, she was a vice president in the litigation department of Fox Entertainment Group in Century City, where she oversaw litigation involving Fox Television Stations, Twentieth Century Fox Film Corp., and National Geographic. Her areas of practice include defamation, privacy, right of publicity, copyright, reporter subpoenas, and SLAPP litigation. Before working for Fox, she worked as an attorney for Davis Wright Tremaine in Los Angeles. One of her recent articles for the American Bar Association Communications Lawyer was “Donald Trump is a Libel Bully but also a Libel Loser.”