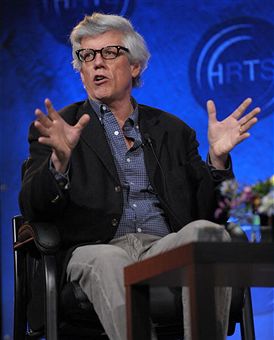 If you want to suck up to your audience, Peter Tolan probably isn’t your best choice. But as moderator of a panel of hit TV-series creators — all with shows nominated Tuesday for Golden Globes — he really can’t be beat.

Tolan (left; all photos by Getty Images), executive producer-writer-director of FX’s "Rescue Me," got things off to a warm and fuzzy start by flipping off the audience as he took the stage at the Hollywood Radio & Television Society’s Hitmakers lunch Wednesday.

Then he made a crack about the size of the audience, saying if one discounted the staff in the Century Plaza Hotel’s ballroom, the remainder would about equal the audience for last night’s "Jay Leno Show." "That’s great for the HRTS, and an acceptable number for NBC," he quipped.

Tolan then started telling the panelists to "f— off" for assorted reasons, such as their being younger or more successful than he is. 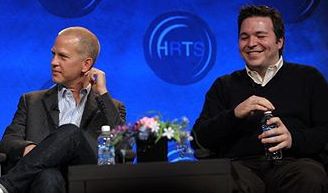 His first question was about the panelists’ worst jobs, "so we can all take some pleasure in your past pain." Bays (far right) confessed that he’d worked at Hooters — "Those shorts were not flattering!" he joked — for half a summer as a fry cook, while Levitan said he’d earned extra money as a camp counselor by cleaning out the bathrooms.

Weiner confessed, "I’m a writer because I’m unemployable in every other profession." And Murphy (near right) cracked up the crowd by detailing "a week of terror at a mall" when he was 15, which started with part of a day at Florsheim (he got fired by 4 p.m. because he was afraid to touch feet), segued to a stint at the Gap (he got fired for being too lazy to shelve jeans on the higher shelves) and concluded with happiness as a jewelry gift-wrapper, a job that lasted two years.

The creatives then discussed their various shows, talking about their genesis.

Bays said he and partner Craig Thomas (who was scheduled to be on the panel but was called away) had two ideas when they started out — one that involved a lot of research into things such as nuclear reactors, and one based on their own lives. They decided, as he said, "Let’s be that show people watch and say, ‘That’s me, I’ve been there.’"

It was at that point that they recalled having jotted down the title "How I Met Your Mother" in a notebook somewhere, thinking it would work for a movie or show or just about anything.

The structure of the show, which is flashing back from the now-middle-aged narrator to his younger single days, came about because "dating or being single is so uncertain," Bays said. "It was nice to come at it from a place where you know it will turn out well," where the narrator is happily married with two beautiful kids.

"HIMYM" was the only show of the four not nominated itself, though cast member Neil Patrick Harris is up for best supporting actor.

Tolan asked Murphy if his Fox hit "Glee" was inspired by his own life. Murphy said he did want to be an actor as a kid, and appeared in some musicals. Tolan immediately demanded to know which roles, and when Murphy said he’d played Albert in "Bye Bye Birdie," as Tolan had, Tolan challenged him, "Let’s do it!" Sadly, there was no throwdown.

Murphy said he wanted "Glee" to "tap into the feeling that anything is possible at that age," in high school, as well as re-creating the sense he had then that he was always in a spotlight.

Murphy later told TheWrap that when "Glee" returns in April to finish its first season, each episode will have eight to 10 musical numbers, up from the average of five or six per show in the first half of the season.

After working on the "unrelentingly dark" "Nip/Tuck," Murphy confessed, "I wanted something lighter." And "Glee," he said, "is the most fun I’ve ever had on a show. There are only three writers, so we can say what we want to say."

Tolan also brought up "Glee’s" Golden Globe nominee Jane Lynch, saying, "It was a wonderful choice to make the enemy of these kids an adult." Murphy said that character wasn’t even in the pilot script, and was added at the suggestion of Fox executive Kevin Reilly, who thought the kids were too nice. "I said you came to the right guy," Murphy said.

Lynch’s name came to mind, Murphy said, so he set about writing the part thinking, "What can I do to get Jane Lynch’s attention?" The description of "Sue Sylvester" included notes such as "probably on horse estrogen, probably has posed for Penthouse magazine," he said. He sent it to the actress and she said yes "before I finished the character description!" 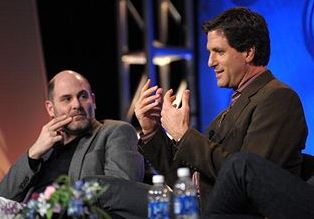 Tolan queried Levitan (near left) on whether he has any sense, early in production, of whether a show is going to take off. Levitan’s two most recent credits are the ABC first-year hit "Modern Family" and, before that, Fox’s "Back to You" starring Kelsey Grammer and Patricia Heaton.

Levitan said of "Modern Family," "This just felt right from the very beginning. I was sitting around with my family, listening to what they say, and I thought, ‘It’s time for these people to stop freeloading!’ I had to harness that.

"I’m directly stealing from our lives," he added. "That’s why it resonates." Tolan compared that style to great sitcoms such as "The Dick Van Dyke Show," which Carl Reiner based on his life, and Phil Rosenthal’s "Everybody Loves Raymond."

In fact, Levitan confessed that the incident in the pilot where Phil Dunphey (Ty Burrell) shoots his own son (Nolan Gould) with a BB gun to punish him for using it to shoot a living thing was based on him and his son. "We actually videotaped it," he said, which was useful for the show’s writers. Even the boy’s outfit — featuring multiple layers of clothing to absorb the blow — came from Levitan’s son.

Weiner (above left) talked about the tough side of life as a television writer. "I’m always stressed out about ["Mad Men"]," he said. "I wrote the pilot nine years ago, and I didn’t know if anyone would ever see it. But I wanted it to be the best show ever."

The first season, he confessed, he was always repeating, out loud, "I don’t want to fail." By the second season, his mantra had become, "I don’t want to lose this." Now, in "Mad Men’s" third season, he doesn’t feel he has to say anything. (Tolan quipped the new mantra is, "Don’t look Mr. Weiner in the eyes!")

Weiner said he doesn’t want anybody too famous to appear on "Mad Men," for fear they will take the audience out of the show, but admitted his definition of famous is not everybody’s. For instance, he said Joel Murray, who played Fred Rumsen, "was almost too famous for me," much to Murray’s surprise.

Asked how Robert Morse got cast in the show, Weiner credited co-executive producer Tom Palmer for suggesting the actor, "who frequently refers to his character as Sterling Cooper [the name of the ad agency]. He is a lunatic. He’s a natural entertainer, to the point where he will entertain you against your will."

Tolan closed the lunch on an optimistic note, complimenting the panelists on creating four very different styles of shows that are all flourishing — surely a sign of the health of the industry.