Sterlin Harjo, the co-creator of the hit FX show “Reservation Dogs,” from an Indigenous group of writers and directors, is developing another FX show.

Award-winning bestselling novelist, Jonathan Lee, is repped by CAA and 42. Lee is also an editor, and screenwriter. His latest novel “The Great Mistake” was published by Knopf in June. His 2016 work “High Dive” was chosen as a book of the year by The New York Times, The New Yorker, The Wall Street Journal, and The Washington Post.

Harjo & Lee co-wrote the first episode, which Harjo would direct and EP with his Reservation Dogs partner Garrett Basch, through Basch’s new company, Dive. Plot details are under wraps. 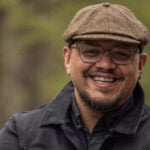 Harjo also directed and produced the features “Mekko” and “Barking Water,” which premiered at Sundance Film Festival in 2009. He is represented by Circle of Confusion and APA.

“Reservation Dogs” was just renewed for a second season. Co-created with Oscar winner Taika Waititi, the series became popular for plot and diversity and representation as an FX on Hulu exclusive. The show was also shot entirely on location in Oklahoma. The breakthrough series can be streamed on Hulu.