“Resident Evil” is getting its first-ever live-action TV series and the release date has been set for July 14, 2022. Along with the date announcement, Netflix debuted three pieces of teaser art for “Resident Evil” on Thursday, which you can see below.

The long-running video game series has seen plenty of adaptations; most recently Sony’s film franchise reboot “Resident Evil: Welcome to Raccoon City” and Netflix’s animated series “Resident Evil: Infinite Darkness,” both of which debuted in 2021. However, the upcoming Netflix show will be the first live-action series adaptation.

Netflix’s new “Resident Evil” series picks up in 2036, after the confirmed timeline of the games, and 14 years after a deadly virus caused an apocalypse.

Per the series logline, it follows Jade Wesker – daughter of familiar “Resident Evil” character Albert Wesker – as she “fights for survival in a world overrun by the blood-thirsty infected and insane creatures. In this absolute carnage, Jade is haunted by her past in New Raccoon City, by her father’s chilling connections to the Umbrella Corporation but mostly by what happened to her sister, Billie.” 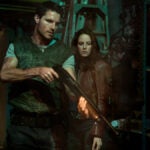