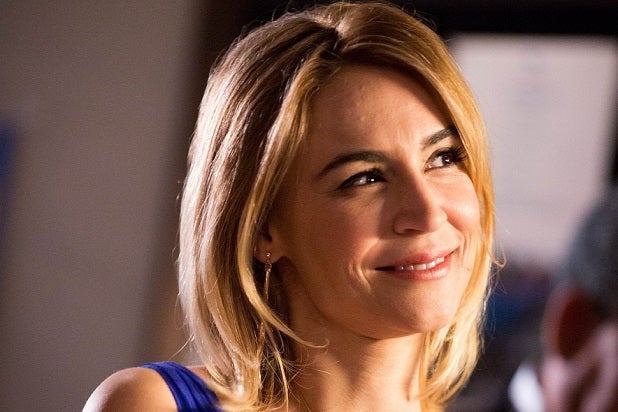 Photo courtesy of UP

The “O.C.” veteran, who currently stars in the hit ABC drama “Resurrection,” will star as a female minister in the upcoming TV movie “Match Made in Heaven,” which will premiere on the UP network later this year.

Based on the novel “Heavens to Betsy” by female minister Beth Pattillo, “Match Made in Heaven” will star Armstrong as Rev. Casey Hart, a senior minister who finds herself at a crossroads in her professional and love life. Faced with a leaking baptistery and match-making parishioners who steal from the collection box and doubt the validity of a female minister, Hart further finds herself flustered by the sudden feelings she has for her friend, fellow seminarian and verbal sparring partner, Rev. David Swenson (played by “Motive’s” Brenden Penny).

After being thrust into the position as senior minister at her church, Hart realizes that the true source of her discontent is that her fear of failing could be stronger than her faith in herself. With help from her best friend and seminarian Ronnie Mason, Hart attempts to reclaim her confidence while reconciling her clerical robe with high heels and the right shade of lipstick.

“From the start, we were really impressed by this funny, moving look behind-the-pulpit tale based on real-life minister and author Beth Pattillo’s novel as adapted by Cara J. Russell,” UP senior vice president, original programming Barbara Fisher, said. “The story is a nice fit for UP’s audience.  Plus, we are lucky to have the beautiful, funny, relatable Samaire Armstrong leading the ensemble cast as Reverend Casey Hart.”