NBCUniversal has entered a talent-holding deal with actress and comedian, Retta, who co-starred in NBC and Universal Television’s “Good Girls” and “Parks and Recreation.”

Under the terms of the deal, Retta will collaborate on projects where she can star on the company’s entertainment platforms, which include NBC, cable networks Bravo, E!, Oxygen, SYFY, Universal Kids, and USA Network and streaming service Peacock.

“I’ve spent most of my career working with NBCUniversal and I was lucky to have my first series regular role on ‘Parks,’ which continues to be beloved by a dedicated fan base,” Retta said in a statement. “It was a love for Donna Meagle that motivated Marti Noxon’s preteen daughter to encourage her mom to put me on ‘Girlfriends’ Guide to Divorce.’ ‘Girlfriends’ allowed me to do drama, which in turn allowed Jenna Bans to see me as Ruby Hill, giving me one of my favorite roles yet. Plus, I have a forever love for (casting EVP) Grace Wu, who gave me my first industry meeting after seeing me do stand-up at the Hollywood Improv all those years ago. It’s a cozy and familiar place for me.” 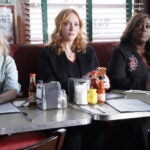 “Having met Retta over 20 years ago, it’s been a joy to watch her evolve from hilarious stand-up, to an accomplished and compelling actor in both comedy and drama,” said Grace Wu, executive vice president of casting, entertainment content at NBCUniversal Television and Streaming. “I don’t think there’s anything she can’t do, and we are thrilled to find her next amazing role in the NBCU universe.”