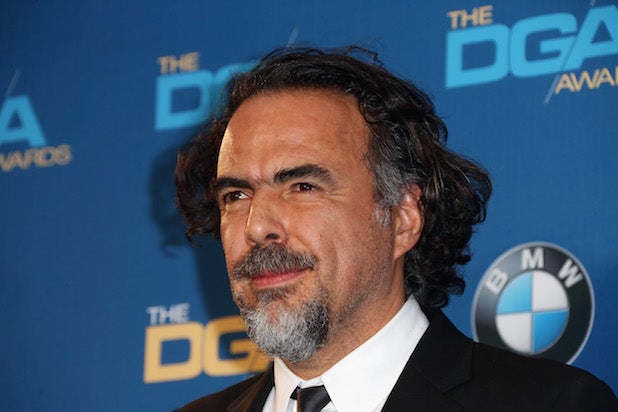 In his acceptance speech after winning the Directors Guild of America Award for “The Revenant” on Saturday night, Mexican-born director Alejandro G. Inarritu took a shot at Donald Trump’s immigration policy — and he expanded on those statements later in the press room, saying that Trump’s plan to build a wall on the U.S./Mexican border would “betray the foundation of this country.”

In his speech, Inarritu joked about how after receiving his nomination medallion earlier in the show, he’d walked through the kitchen of the Hyatt Regency Century Plaza Hotel. “There [were] more than 120 Mexicans in the kitchen that serve you hot food, and that was the best party I had,” he said.

He added, to laughter from the 1,700 in attendance at the awards ceremony, “That’s not the people Donald Trump has described at all, let me tell you.”

In the press room after the show, Inarritu explained that he found contemporary resonance in the real-life story of a frontiersman in the 1820s, when the country’s western expansion and the concept of Manifest Destiny was causing white Americans to wreak havoc on Native American tribes.

“On the surface it’s action, adventure and survival, but deep down there were things that were much more important,” he said. ” … The story of Hugh Glass [played by Leonardo DiCaprio] as the father of a mixed-race kid is something I wanted to explore, how you grow up as an outside face.

“The race problem that existed at the beginning of this country, and in my country, hasn’t been solved,” he added.

Also Read: Donald Trump Has Not Smoked Weed, Only Eats Cereals 'Made in the USA'

“To try to build a wall to stop that is exactly to betray the power of this country, what has been absolutely outstanding, admirable and unique in the United States.”

Last year, Trump responded to Inarritu’s “Birdman” winning the Best Picture Oscar by telling Fox News that the evening was “a great night for Mexico, as usual.”

And while Inarritu spent most of his time addressing the controversy over Trump’s comments, he noted in passing the way that diversity issues have affected this year’s awards race.

“It’s a cultural problem,” he said, “not the problem of the Academy.”