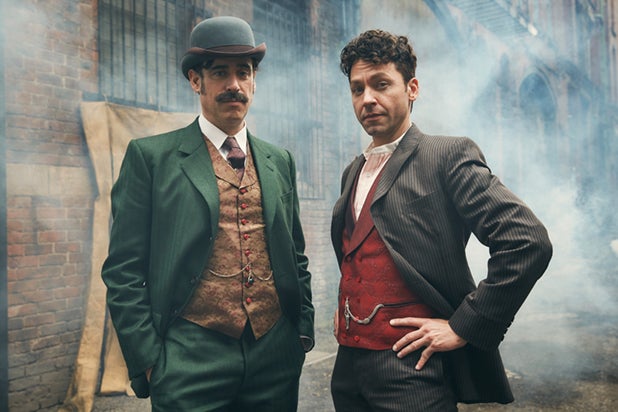 Period pieces are hard. Period pieces incorporating actual historical figures can be harder. Not only are there a slew of details the producers must get right in order for the audience to buy in, but maintaining a story that adds a fresh sense of must-watch TV is a tall order indeed.

At first glance the project appears to be an attempt at a fun, summer romp into the crime genre, as heightened by beautiful Victorian costumes and sometimes overly exposed settings (the Toronto backdrops will be familiar to those who have frequented the city). As the pilot kicks in, however, the two leads’ opposing views on spirituality begin to take center stage.

Houdini, a man known to have debunked mediums and other such “tricksters” with his scientific knowledge, immediately conflicts with Doyle’s own deep spiritual beliefs. Both backgrounds are presented in earnest as the principle crime–a murdered nun–unfolds, and a “ghost” supposedly haunts the convent. Both viewpoints are based on the history of the men in question, although as these two learn to work together there’s some flexibility towards accepting the opposing stance, especially by the end of the first hour.

It’s a formula that works well for most fish-out-of-water cop dramas, in which polar opposites are forced to work together and learn from each other despite their stiff attitudes. Here it works marginally well, but becomes distracting with so much else going on. Liddiard’s own character has her work cut out for her as well, having only been assigned to the famous duo in order to serve as “a nursemaid.” Her journey to be taken seriously as the only female constable is just as much an issue as the spirituality question, and is presented at several turns throughout the pilot.

The trio of actors is watchable enough, although Mangan in particular delivers real heart as the Sherlock creator. His balance of a man torn between wanting to kill the fictional man that popularized him and wanting to believe in a higher power is a fine one that’s pulled off with aplomb. His scenes give the first hour some much-needed heart, and serve as a real departure from “Episodes,” where American viewers saw him last.

Where “Houdini & Doyle’s” magic ends is with the actual murders themselves. These men working together as “detectives” is an implausible plot to begin with, especially on a week-to-week basis. Given their own respective fame and obsession with their careers, it’s hard to imagine a world where they had this much time to dedicate to solving murders. Add in the trope of the regular cops being terrible at their jobs, and the viewers are certainly being asked to suspend some of their own beliefs in order to enjoy the premise each week. It’s a tall order for Fox but one that the network seems comfortable with given its penchant for summer series that focus on cop duos with special powers. Unfortunately, it’s also a format that rarely makes it past the ironclad fall gate.

“Houdini & Doyle” premieres Monday, May 2 on Fox and on Global in Canada.