Rich Ross, like Bob Iger, is playing a high-stakes game at the studio that he now runs.

With the ouster of studio president Oren Aviv on Tuesday, Ross has made a clean sweep of the regime that thrived for many years under studio chairman Dick Cook. 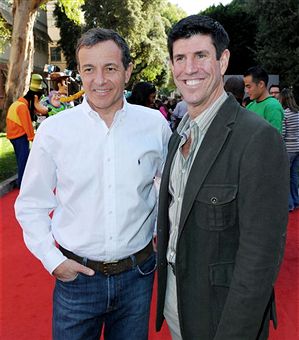 The head of marketing is gone, the head of home entertainment has been changed, the head of publicity has been swapped and by all accounts corporate communications chief Heidi Trotta is on the cusp of being moved out as well.

With a replacement for Aviv expected to be announced before the end of the week, change is clearly the byword in the new Disney.

But in the quest to bring in a new way of management — out with the old boy’s network, and in with the tough questioning of every aspect of the studio’s methods – some are wondering whether Ross is cutting himself off from the movie expertise which he will so sorely need.

The hard-charging executive — a noted contrast from the avuncular  Cook he replaced — comes from the world of television, where he most recently ran Disney Channels Worldwide.

And Ross has more or less taken control of the studio marketing department himself.

As one insider executive put it: “How are Bob Zemeckis and Steven Spielberg going to react to the words ‘Trust me, this is a great spot we should go with’ from someone who has seen fewer movies than their kids?”

Ross’ clean sweep may well work, but “If you literally sweep away anyone with experience, that doesn’t mean you’re going to fail – but it does mean you’d better be right,“ the executive said.

Certainly the serial sweep of executives, without having an alternate team ready to go in the wings, has struck many as ham-handed.

Said an executive at a rival studio: “I think he doesn’t know what he’s doing. It feels rudderless. What are the movies they’re making? They don’t have franchises, they don’t have plans. It’s a little scary.”

This is especially dangerous this year, when Disney has a huge release slate, one that will require tremendous resources and skill to bring to market — Tim Burton’s “Alice in Wonderland,” "Prince of Persia” and the big-budget “Tron: Legacy” at the end of the year.

According to those who have worked with Ross so far, his Achilles heel, if he has one, may be that he projects the attitude of knowing how to “do everybody’s job better than they do it,” as one insider put it, using the marketing department as an example.

From Disney’s perspective, it is just this situation that Ross is in the midst of rectifying.

One executive pointed out that the studio has had 20-odd presidents — an unnecessary glut of top-heavy positions.

All of that has been under review.

”He asks a lot of questions, and he asks for justifications for decisions,” said a Disney executive defending Ross’ moves, acknowledging that a lot of people were “upset” by Ross rocking the boat. “He’s very hands-on in terms of demanding strategy, reasoning — he holds people accountable.

Regardless, the approach now at Disney seems to be one of focusing on the various brands that make movies for the studio — DreamWorks, Pixar, Marvel, Jerry Bruckheimer and Robert Zemeckis.

Ross is known to want to weave those brands into the larger strategy for Disney as a global media company. That, too, seems to be Iger’s focus, and one that did not jibe with the business-as-usual approach long-taken by Cook.

Thus, the studio makes ever-fewer movies in-house, and even fewer mid-sized budget movies of the kind that bring in a surprise hit like “The Proposal” with Sandra Bullock, which has brought in $314.7 million worldwide at the box office — on a budget of $40 million.

That writing was on the wall with Ross’ cancellation of “Wild Hogs 2,” the sequel to a financially successful film made by Aviv.

As for Aviv, he was said to be shocked at being fired by Ross on Tuesday. He had survived the waves of cuts that preceded him and indeed had been given extra duties during the last reshuffle two months ago, with physical production being added to his brief.

He had 18 months left on his contract.

According to those knowledgeable about the conversation, Ross told Aviv that he needed his team in the top jobs.

So be it. A lot will be riding, then, on those decisions — which should be imminent.

As the insider executive put it: “The question on him will be his hires — whoever replaces (Aviv) — if the person is from the business, understands the movie business … That’s where the test is. That’s where the rubber meets the road.”