Ricky Gervais has hosted the Golden Globes five times, but he doesn’t think he’ll ever host the Oscars — mostly because he’s pretty sure he’s a little too freewheeling for the Academy. But, if they were to give him the freedom to be himself, Gervais says he’d happily take the job, and for free at that.

Gervais stopped by “The View” on Thursday, in support of the third and final season of his Netflix series “Afterlife,” which released on the streamer last Friday. During his interview, host Sunny Hostin asked him why exactly he thinks he wouldn’t be allowed to host the Oscars.

“Well, I might be allowed to host it if I did what I was told,” Gervais said. “But there’s the rub. You know, the great thing about the Globes was they said I could write my own jokes, say what I want, and not rehearse. And that is just too good for a comedian to turn down. I don’t think the Oscars ever would allow me that freedom. And rightly so! I think they’d be mad!” 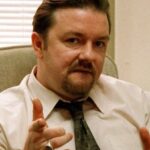 That said, if the Academy were to extend such leniency to him, Gervais says he’d happily take the gig, and would ask for absolutely nothing in return.

“If they did, I’d do it!” Gervais quickly added. “If they said that, I’d definitely do it. I’d do it for free if they said I could do that.”

The hosts of “The View” were delighted at that, each saying they’d love to see Gervais host the awards show. Whoopi Goldberg even went so far as to say that, if Gervais was genuinely up for it, she could put in a good word for him with her connections.

“If you’re serious, you know I could talk to a few people,” Whoopi said cheekily. “I know people.”