The stellar $55 million box-office debut of “The Martian” this weekend marks a return to form for Ridley Scott, and raises the prospect that the acclaimed director could be in line to take another run at his first Oscar victory.

“The Martian” is Scott’s best sci-fi opening ever, ahead of “Prometheus,” “Alien” and “Blade Runner,” and second overall only to “Hannibal,” which rolled out to $58 million in 2001.

“Because ‘The Martian’ feels very much like a director’s movie, I think he’s got a good shot,” said Rentrak senior analyst Paul Dergarabedian about Scott’s chances of scoring an Oscar nomination.

Scott is a true auteur, who leaves his stamp on virtually every movie he touches, Dergarabedian note. That includes the brilliant and decidedly dark outer space horror of “Alien” and the watershed futuristic world of “Blade Runner.”

The British director’s box-office hits include “Hannibal,” “American Gangster,” “Gladiator” and “Thelma & Louise.” He earned Best Director nominations for the latter two, as well as the 2001 drama “Black Hawk Down” about a devastating U.S. military raid in Somalia. But even when “Gladiator” was named Best Picture, the directing award went to Steven Soderbergh for “Traffic.” However, “The Martian” could change that. 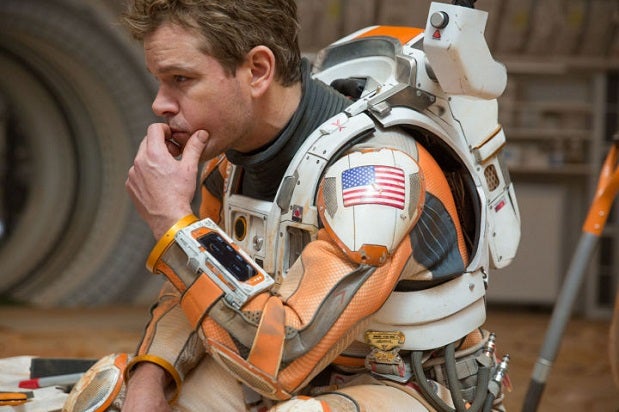 “‘The Martian’ is the latest example of his ability to take the fantastical and the otherworldly and ground it in a reality that audiences can relate and respond to in a very human way,” Dergarabedian said. “Machines may abound in his space odysseys, but real human emotion is always at their core.”

Scott’s previous two releases — last year’s “Exodus: Gods and Kings” and 2013’s “The Counselor” — both underwhelmed commercially. The Biblical epic wasn’t helped when the typically frank Scott reacted to complaints about the mainly Caucasian casting by explaining that he couldn’t put together a film with such a large a budget “and say that my lead actor is Mohammad so-and-so from such-and-such.”

While Scott has yet to claim a statuette, he directed Russell Crowe to a Best Actor Oscar win for “Gladiator.”

Scott is also cited in another fall film with awards hopes, Universal’s “Steve Jobs.” At the end of the biopic about the Apple co-founder, Scott gets an on-screen thank you for allowing clips from his acclaimed 1984 TV commercial for Apple throughout the film.

His direction could be a good omen for “The Martian” star Matt Damon too. According to TheWrap’s Alonso Duralde, the survival saga is “Damon’s finest work, allowing him to be both puckish and brainy amidst his travails.”

Duralde isn’t the only critic giving the film and its star props. “The Martian” is currently at 94 percent positive on Rotten Tomatoes and received an “A” CinemaScore from audiences. Fox Distribution President Chris Aronson credits Scott for the film’s positive reception.

“This is first and foremost a phenomenal movie from a master filmmaker and was executed flawlessly,” Aronson told TheWrap.

For the record: A previous version of this story incorrectly stated that Geena Davis had won an Oscar for “Thelma & Louise.”