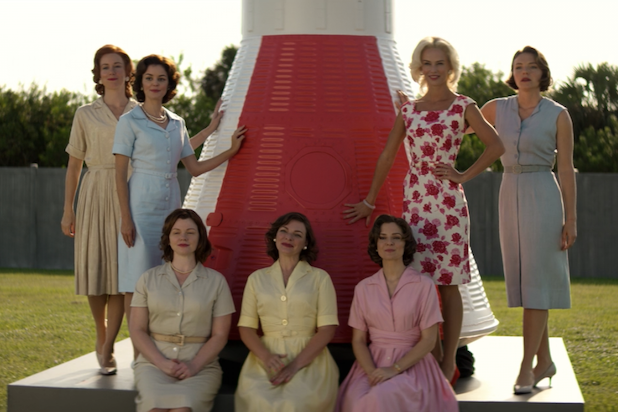 What’s worse than wearing white to a wedding? Well, if you’re one of the Mercury 7 wives, wearing a bold floral print to a photoshoot where all the other women have agreed to dress plainly.

That’s what happens in Episode 3 of Disney+ series “The Right Stuff,” when Scott Carpenter’s wife, Rene Carpenter (played by Jade Albany Pietrantonio), shows up the other gals. Imagine the side-eye just before the flash.

But did it really happen? Yes, the platinum blonde Mrs. Carpenter arrived at the wives’ Mercury space capsule photoshoot wearing a sleeveless red floral dress, breaking the dress-code rules, as the other women were dressed in their assigned solid colors: pink, yellow, blue and white.

Readers can see the original photo from the shoot in question, which was done by Life magazine, here.

Rene Carpenter, who later divorced Scott Carpenter (played by James Lafferty in the Disney+ series) died of congestive heart failure in July at the age of 92. She was dubbed “the undisputed prom queen of the early space program” by People magazine.