Right-wing street artist Sabo has been suspended from Twitter, with his @UnsavoryAgents going offline on Friday.

“They told me nothing or for how long,” Sabo told TheWrap, when asked if he was notified if it was a permanent or temporary removal. His account had approximately 30,000 followers. Twitter has not responded to multiple requests for comment from TheWrap.

Sabo has been critical of big tech companies in the past, and his website includes a “F— Zuck 2020” poster, aimed at Facebook CEO Mark Zuckerberg’s rumored political aspirations. The artist also mocked Google with a “think different, not so much” campaign last year, after the company fired engineer James Damore for his “diversity memo.”

“We may suspend an account if it has been reported to us as violating our Rules surrounding abuse,” said Twitter’s explainer on suspended accounts. “When an account engages in abusive behavior, like sending threats to others or impersonating other accounts, we may suspend it temporarily or, in some cases, permanently.”

“I don’t think the tech companies are trying to shut The Right down, I know they are,” Sabo told TheWrap. “They are developing an entirely new language to demonize anyone who does not think like them, then de-platform them in hopes of their networks not being there for us during the midterms or for the election of 2020. But they, like the goons in Hollywood, over-estimate their importance.”

Sabo decided to start lambasting the entertainment industry during George W. Bush’s time in the Oval Office. “It was not a good time to be a Republican in Hollywood,” said the artist on his site.

“My aim as an artist is to be as dirty, ground level, and mean as any Liberal artist out there, more so if I can,” his site continued. “Use their tactics, their methods, appeal to their audience, the young, urban, street urchins with a message they never hear in a style they own.”

Recently, Jimmy Kimmel, Harvey Weinstein and Al Franken have drawn his ire, with artwork popping up around Los Angeles blasting the trio. He’s also painted burkas on movie posters around town, saying: “Hollywood insists I embrace the Muslim faith well ok. I’ll embrace it by painting nijabs on the faces of the starlets on their movie posters.” 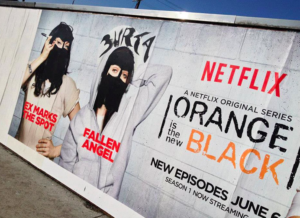 Burkas drawn on posters around town (via unsavoryagents.com)