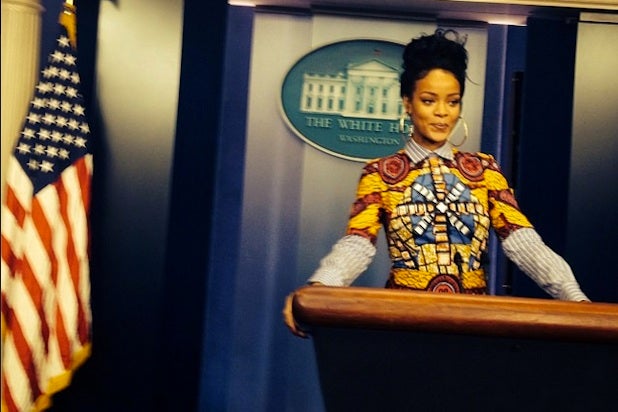 If “Scandal” was hoping to count a reigning pop princess among its fans, consider it handled. Rihanna posted photos from a White House visit on Monday and wasn’t shy about displaying her fandom for the show.

“”CYRUS!!! LET ME IN!!” the singer captioned a snap of herself, using a phone outside the White House gates, referring to Jeff Perry’s character Cyrus Beene on the ABC hit. A second in the series had her cooing “Fitz, Darling,” referring to Tony Goldwyn‘s fictional President Fitzgerald Grant.

Clad in a bold print dress, the singer and a group pals enjoyed a West Wing tour that saw stops in the official press briefing room where the “We Found Love” crooner climbed behind the podium.

The photo set winds down in a stately library with Ri & Co., whom she has dubbed “West Wing Posse!! We wanne be O.P.A. so bad!”

“Scandal” will air Thursdays at 9 p.m. and its midseason finale airs on Nov. 20. Lucky for you, Rihanna is back to her prolific sharing status after her own little hiatus.

"CYRUS!!! LET ME IN!!" #DayAtTheWhiteHouse