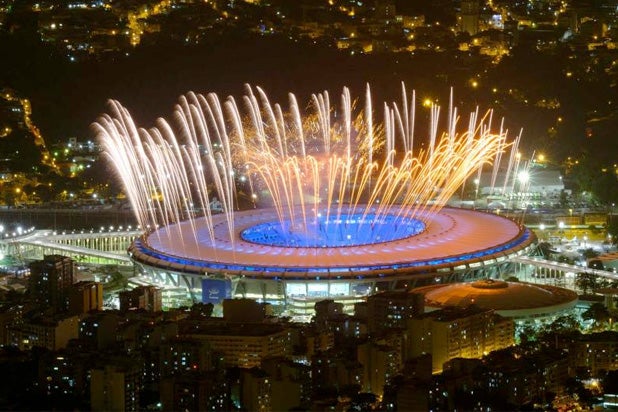 For the 2016 Summer Olympics’ opening ceremony, NBC grudgingly found time between commercials to actually show audiences what was going on in Rio de Janeiro. And in case you didn’t have eyes, Matt Lauer, Meredith Vieira, and Hoda Kotb provided inane commentary explaining exactly what the cameras showed you. That ranged from Cirque du Soleil choreography that began with a recreation of the creation of the world and ended with a bleak message about global warming, to a weird shout-out to Brazilian supermodel Gisele Bundchen,  to the Internet’s immediate new boyfriend, Tonga flag bearer Pita Nikolas Taufatofua.

But what NBC did with the (delayed for primetime) ceremony was out-of-step with today’s immediate, GIF-friendly news cycle, which found the highlights already living and widely discussed on social media hours before they finally aired, amid a seemingly endless number of commercials,  on the Peacock network.

Most of the first hour was given over to an interpretive dance, choreographed by Cirque du Soleil’s Deborah Colker, that began with what looked like the Tin Man’s family: Shiny, silver-clad dancers who did some impressive synchronized work pounding on giant metallic pillows. The effects were surprisingly elaborate given the stripped-down nature of the dances; Lauer smarmily reported that cash-strapped Brazil spent money of video projections rather than massive set pieces.

Also Read: Olympics TV Schedule: When and Where to Watch Each and Every Event

It was pretty effective, even if at times audiences ended up watching a bunch of people in white jumpsuits walking in circles, holding giant insect puppets aloft as the camera work and closeups ruined the spectacle. Not to mention the terrible, dismissive commentary (“And as Swaziland walks in, this is a very good time for us to catch our breath,” Lauer said on air) from all three. As ships appeared among the indigenous people, Vieira solemnly intoned, “Immigration has begun.” Two giant hamster wheels replaced the ships, and Lauer added, “And then something else arrived in Brazil. The slave trade.”

Squeezed between the slave trade and a segment on global warming were  Bundchen walking endlessly (described by Matt as “one of Brazil’s most recognizable exports”) and Alberto Santos-Dumont, the father of Brazilian aviation. This back-and-forth was indicative of the opening ceremony’s massive tonal problems: Are we celebrating the best of humankind and a global community, or are we serving a stark history lesson and a bleak vision of the future? Both, as it turns out. Kudos for not shying away from the bloodier aspects of Brazil’s history — or the perils we currently face as a planet — but this seems a little disingenuous, like Marlon Brando sending Sacheen Littlefeather to accept his Oscar. You have the platform, sure, but the message gets lost in the context.

The parade of nations was the usual mix of tedium and enthusiasm, though this year, selfies proliferated and each country was led by a bicyclist on a neon colored bike. Blame it on Rio. At least we had Tonga’s greased up muscle man — er, flag bearer –Pita Nikolas Taufatofua to stay awake for, immediately earning a spot as this Olympics’ Internet crush for wearing nothing but native dress, a washboard stomach, and the Gulf Coast oil spill. “Slow that down,” Vieria said as he made his appearance.

But despite Tonga’s best-in-show, the loudest cheers (other than for Brazil’s team, naturally) were for the Olympics debut of the 10-member refugee team in one of those moments that remind you why the Olympics still retains a hold on your imagination. But then the finale found men and women in gray jumpsuits swiveling what looked like shiny giant cheese graters that transformed into trees before green confetti falls, just in case you forgot that there was choreography three hours before.

And in case the previous four-plus hours weren’t anticlimactic enough, no, Pelé did not make a surprise appearance to light the cauldron–that honor went to Brazilian long distance runner and bronze medalist Vanderlei Cordeiro de Lima. A worthy choice, but hardly the global phenomenon for which the Olympics cry out. But perhaps that’s the most emblematic aspect of the entire Brazil-hosted Olympics: The best of intentions sabotaged by harsh reality.