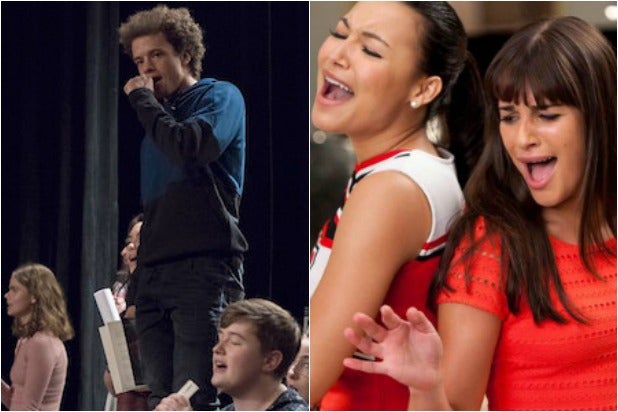 If you tuned into the premiere of NBC’s “Rise” on Tuesday and kept wondering when Lea Michele was going to burst through the door belting out a Broadway hit, you weren’t the only one. Oh yeah, a good chunk of Twitter thought the new series is pretty much “Glee.” And that’s not necessarily a compliment.

Jason Katims’ new high school drama — starring Josh Radnor, Damon J. Gillespie and Auli’i Cravalho — was being compared to Fox’s beloved series about a crew of teens who have nothing in common but their love of song, before it even aired. And now that it actually has, well, fans of the Ryan Murphy show (which aired from 2009-2015) are singing different tunes in their reviews.

“Soooo…the pilot of #Rise is basically the same as the pilot of #Glee? ‘Let’s coerce the QB into being our lead singer by threatening his grades.’ But where are the slushies?” one viewer tweeted, pointing out the opening story lines are, well, very similar.

Also Read: 'This Is Us' Season 2 Finale: That Cliffhanger Means We're Going Back to the Future - Right?

Others wanted to focus on their differences, like the quality of the cinematography. “#Rise is Glee with a really gritty Instagram filter,” one tweeted.

And of course, with Radnor playing the drama teacher, there was even a “How I Met Your Mother” joke — which still somehow managed to mention “Glee” too: “‘Kids, did I ever tell you about the time I was a glee club teacher in Lima, Ohio?’ Oh, wait. Is this not How I Met Your Glee Club? Is that not Will Mosby? Where is Jane Lynch? #Rise”

See some of the fan comparisons below.

Also Read: 'This Is Us': Susan Kelechi Watson Wants to Find Out How Randall Put a Ring on It

Glee was self-aware and quirky, which made the clichéd storylines fun, so far #rise is attempting a grittiness that isn’t translating to anything compelling

#Rise is Glee with a really gritty Instagram filter.

Ok so #Rise is 100% Glee so far. No difference. At all. Football storyline? EXACTLY the same as Finn. Does this mean I’m not loving it? No.

Soooo…the pilot of #Rise is basically the same as the pilot of #Glee? "Let's coerce the QB into being our lead singer by threatening his grades." But where are the slushies?

I honestly was so excited to watch @NBCRise but now I see it's nothing more than a carbon copy of Glee. Literally almost shot by shot the same show. The pilots are identical. This show had such potential and lacks any originality. #Rise

“Kids, did I ever tell you about the time I was a glee club teacher in Lima, Ohio?”
Oh, wait. Is this not How I Met Your Glee Club? Is that not Will Mosby? Where is Jane Lynch? #Rise

Teacher bribing football player to try out for the musical. Where have I seen this before… #rise #glee pic.twitter.com/dOKQ7k8OY1

…. sooo… #Rise is basically Glee….. so far… lol ? Mr. Shu 2.0 trying to bring the "classics" to the theater department… but I'm guessing the band of misfits will audition and magic will happen and they will all grow together … right? Ya… thats Glee. ????????

So far, #Rise is exactly the pilot of Glee, but shot like FNL. So, exactly what I expected.