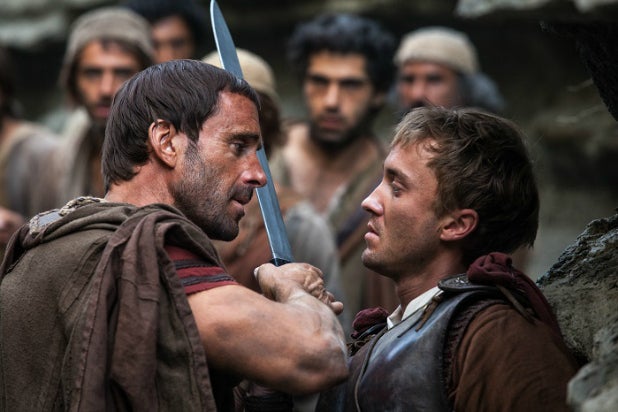 What’s “Game of Thrones” without sex, nihilism, or a 98-person cast? Maybe something like “Risen,” a new faith-based movie set in the days following Jesus’ death, which derives its dusty grittiness from maimings, fanciful threats, a mordant wit, and intricate plays for power. Add its small sets, sublime vistas, exquisite period costumes, and calculating antihero, and you’ve got a fairly ambitious picture tailor-made for that slice of the Christian audience accustomed to the tropes and beats of prestige cable dramas.

The pretty-close-to-good “Risen” is the first religious movie I’ve ever considered recommending to non-believers. Centered on the search for Jesus’ cadaver after his crucifixion, the film’s first half is a brisk, diverting, dryly funny procedural with a serious sociological quandary: To what lengths should one go to prevent devout fanatics from destabilizing an already troubled city? Roman official Clavius (Joseph Fiennes) is ordered to locate the missing body — rumored to be walking around, alive once more, per its owner’s prophecy — by Pontius Pilate (Peter Firth), who wants to ensure that the unhappy Jewish minority not make any trouble during the emperor’s imminent visit despite the recent public execution of one of its religious leaders.

For Sunday school alums, Clavius’ conversion story will be a familiar one; there are unmistakable echoes of the Apostle Paul, a brutal oppressor of early Christians until he became one himself after a celestial intervention. But the delights are in the details: the world around Clavius is recognizable enough to contain guards griping about their overtime shifts and the PTSD symptoms of a witness who can’t quite bring himself to believe the resurrection of Jesus (Cliff Curtis, “Fear the Walking Dead”) — it’s simply too reality-shattering to think about without a round of drinks.

Then there are the cable-drama touches. Helmer Kevin Reynolds (“Waterworld,” “Robin Hood: Prince of Thieves”) stuffs in as much gore as a PG-13 rating will allow, including blood seeping out of Jesus’ eyes (a “True Blood” staple) and corpses in various states of decomposition. “I can have what I want pulled from you,” Clavius menaces softly, attempting to scare Mary Magdalene (Maria Botto) out of her uncooperative silence. Later, he threatens disciple Bartholomew (Stephen Hagan) with Jesus’ fate, showing him the kind of rough-hewn nail — thick as a finger, long as a hand — that’ll be driven into his extremities if he doesn’t start talking.

The most impressive feature in Reynolds and Paul Aiello’s script, though, might be its rejoinders. Charmingly, Fiennes and Firth make the most of their back-and-forths. Standing before a blood-soaked, post-battle Clavius, Pilate teases, “Did you win?” When Apostle Peter receives a reflexive slash across his calf for sneaking up on the Roman enforcer, the future saint keeps ribbing Clavius in a way that quickly establishes their instant fraternity. 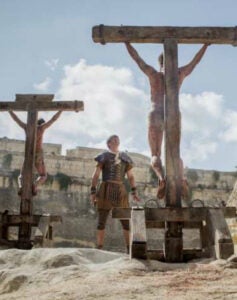 But after Clavius comes to face with face with the dead man he’d been searching for — and is thus forced to reconcile what he used to know about the world with the new reality in front of him — the movie quickly stretches out into eternity. After Judas Iscariot’s (off-screen) suicide, Clavius becomes, in essence, the twelfth disciple, waiting with the rest for His return: wishing, and hoping, and thinking, and praying. Despite the gorgeous mountains where the dirt-streaked dozen are nestled, watching people sit around anticipating something to happen is about as interesting as it sounds.

When Clavius finally gets close enough to reach out and touch the divine, well, like most famous people, they’re rarely all that you’ve hyped them up to be in your head. (Clavius would disagree, but he’s lost to starstruck-dom.)

Unlike the first half, which felt like a fresh look at Biblical events from an unfamiliar POV, the latter section simply recreates the end of the Gospel of Matthew with little of the urgency or humanity that fueled it before. A leper cured of his deformations toward the film’s end looks less impressed than if he’d seen the Miracle Mop in action. And if he’s got no reason to be moved, neither do we.