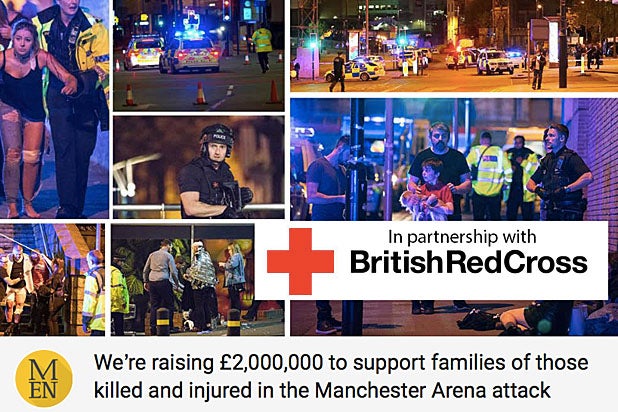 Two of the biggest media companies in the north of England have joined forces to raise money for the families of those killed and injured in Monday’s bomb attack at an Ariana Grande concert in Manchester.

The city’s premier newspaper, the Manchester Evening News, and Newsquest, the second largest publisher of regional and local newspapers in the U.K. with 205 publications, have united with a goal of raising 2 million GBP ($2.6 million).

A total of 22 people were killed and 59 injured when suicide bomber Salman Abedi detonated a homemade explosives device in the foyer of the Manchester Arena following Grande’s show. Abedi, 22, was born in Manchester to parents of Libyan origin, according to the BBC. Many of his victims were young female fans of the pop singer.

The Manchester Evening News (MEN), which is owned by the Trinity Mirror media group in the U.K., initially set a goal of raising the equivalent of $325,000, USA Today reported.

However the level was soon reached due to the outpouring of support ignited by the horrific attack, prompting rival media group Newsquest to offer their help too.

“Today, we at Newsquest have decided to stand together with rival publisher Trinity Mirror to publicize their appeal through our own network of 165 news brands,” Toby Granville, Editorial Director of Newsquest Media Group said Wednesday, praising the “phenomenal response” to the campaign and pledging that Newsquest will double to MEN’s amount for a total of 2 million GBP.

Earlier, MEN editor in chief Rob Irvine said: “The response of the public in Greater Manchester and across the country has been amazing. So many people want to help,” the South Wales Argus reported.

“We have also been moved by the number of papers and websites who have rallied round Manchester, with messages of support on newspaper front pages and website home pages.

“We would be so pleased if our fellow journalists could ask their readers to help the appeal. The Red Cross will make sure the support gets quickly to the families affected. Many of the victims of the attack came from across the UK and they can all be supported.”

London-born actor Tom Hardy has also launched a fundraising page to raise money for The British Red Cross Society because “the families and children will need support.” He has raised 45 percent of his 15,000 GPB target goal so far, which is 6,859 GPB.

Donations to the MEN’s appeal can be made at justgiving.com/crowdfunding/westandtogethermanchester.