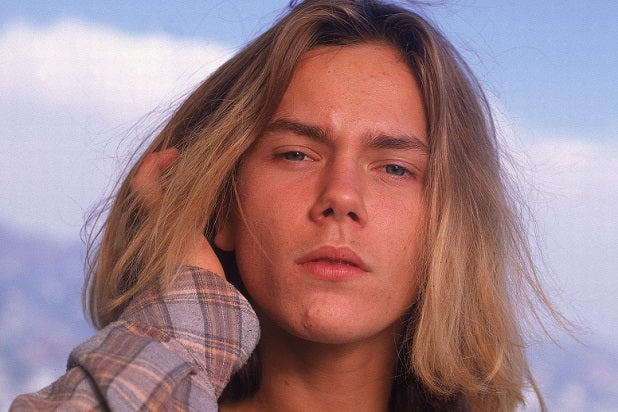 Thursday marks the 20th anniversary of River Phoenix‘s death of a drug overdose — a grim day for Hollywood.

In his new memoir “Running With Monsters” (Crown Archetype, available now), “Celebrity Rehab” star Bob Forrest  — who chronicles his days as a drug addict and musician on the Hollywood scene in the book — recalls the night of Phoenix’s death, writing that Phoenix felt he was suffering from an overdose in the moments before his collapse.

In the book, Forrest recalls being at Johnny Depp‘s nightclub The Viper Room, one of Forrest’s haunts and the scene of Phoenix’s collapse. Following a performance by budding musician Phoenix and Red Hot Chili Peppers guitarist John Frusciante — a performance undone by the pair’s excesses — Forrest recalls a gathering in an office of the Viper Room.

“Somebody broke out the coke and passed it around. River was obviously wasted and was as unsteady as a boxer who had taken one too many head shots during a 15-round bout,” Forrest recalls in the book. “His complete lack of motor skills made me think he was drunk. Heroin will make users lean when they stand still, but you almost never see them stumble and fall.”

Forrest recalls Phoenix approaching him later, during a performance by Depp’s band P, and admitting that he might be undergoing an overdose.

“They were always a fun band to watch, and tonight, they played well. It was great  fun until I felt a hand tap my shoulder and turned to see River. He was a whiter shade of pale,” Forrest writes.

Forrest was doubtful that Phoenix was overdosing — “Usually you just OD and that’s it,” Forrest observes in the book — but offered to get Phoenix home. The actor declined, saying he felt better.

“I tried to reassure him. ‘I don’t think it’s an OD. You can stand and you can talk,'” Forrest writes in the book. “I still have guilt that I dismissed his worries so casually.”

Shortly thereafter, a commotion erupted in the club, and Forrest rushed to the door to find Phoenix’s girlfriend, “American Psycho” actress Samantha Mathis, screaming as her boyfriend convulsed on the sidewalk.

Also read: Tom Sizemore Was Once So High, He Didn’t Know There Were Cameras on ‘Celebrity Rehab’

“He was alive, because his arms and legs shook like he was having an epileptic fit,” Forrest recalls in the book.

Forrest admits in the book that his concern for Phoenix’s well-being at the time was tempered by his own sense of self-preservation. As an addict who traveled in a circle of other drug users, Forrest writes that he was concerned that the publicity from the event could draw legal heat to himself and his peers.

“I felt awful that River had collapsed. I may have been a junkie, but I was human, and I had empathy and concern for my friend,” Forrest writes. “But I was also fearful that the rest of us could be hauled in for questioning.”

“It was three o’clock on Halloween morning. Hospitals are spooky places to begin with, but the day and the stillness of the hour only compounded the unease,” Forrest writes.

“I saw Samantha standing alone. She was crying,” Forrest recalls in the book. “I knew just by looking at her that River was dead.”