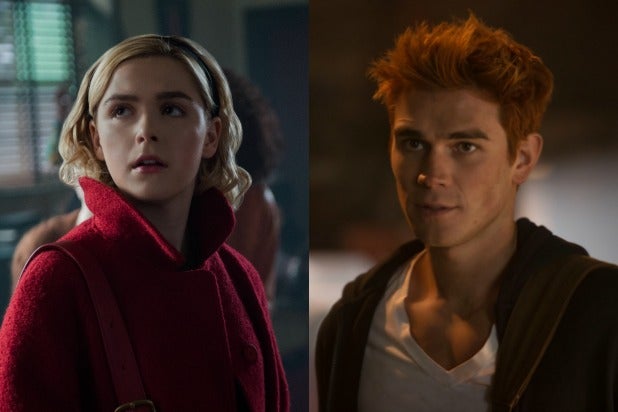 Welp, we’re sure you could use a milkshake from Pop’s after that lockdown shocker on the fall finale of “Riverdale” — but since we can’t order you up a frosty one of those, allow us to give you these treat: a preview of the next batch of themed episodes coming to The CW’s dark take on the Archie Comics and a status update on when you’ll (hopefully) get that crossover with Netflix’s “Chilling Adventures of Sabrina.”

“One episode we’re doing is an episode called ‘Bizarrodale,’ which treats- instead of Archie, Betty, Veronica and Jughead being the Core Four, it treats Kevin, Cheryl, Reggie and Josie as the Core Four,” “Riverdale” showrunner and chief creative officer at Archie Comics, Roberto Aguirre-Sacasa, told TheWrap, when discussing Wednesday’s midseason closer and what’s to come when the show returns in January.

“And it’s a really fun episode. A really fun episode,” Aguirre-Sacasa says. “I’m really excited about that one. And then we have an episode- the show has always been noir and always trending noir. But we’ve got an episode coming up that is completely noir: how it’s written, how it’s shot, the plot of it. And it’s really fun.”

Also Read: Watch Out, Bughead Fans: Gladys Is a 'Problem' for Jughead and Betty When 'Riverdale' Returns

Get ready to say goodbye to Archie’s fiery locks that night (if he dyed his hair back from brown to red by then, that is) as Aguirre-Sacasa confirms that “parts” of that episode were shot in black and white.

Because Aguirre-Sacasa is the creator/showrunner on both The CW’s “Riverdale” and “Chilling Adventures of Sabrina,” another haunting adaptation of an Archie Comics character, he has been asked about the chances of a crossover even before “Sabrina” debuted in October.

“There’s one thing I’m trying to figure out that’s a nice Easter egg that I’m trying to get permission to do — but it’s too soon to talk about yet,” he said.

The two series are both produced by Warner Bros TV and exist in the same universe, as the first season of “Sabrina” featured references to “Riverdale” and the use of one minor character from its CW sister show. But a full-on crossover could take more time, though Aguirre-Sacasa is hoping he can make it happen.

“We’re still in production on the second part of ‘Sabrina,’ we haven’t wrapped yet,” he says. “I think right now our focus is all on wrapping up and getting that landed in a great way. I think once that’s behind us, I think we’ll be able to really investigate and have the conversations about this. That’s my hope at least.”