“Riverdale” ended its third season tonight with a grand finale that not only revealed the (confusing) identity of the Gargoyle King, but tied together many plot points going back to the series premiere of The CW’s dark take on the Archie Comics.

Because the episode, titled “Survive the Night,” got a little complicated, here and there — and because the town of Riverdale is more than a little complicated, here and there — TheWrap broke things down with showrunner Roberto Aguirre-Sacasa, who told us the meaning behind the closing moments’ bloody flash-forward, his ideas for “Riverdale” crossovers with its upcoming spinoff series “Katy Keene,” and what it was like finishing off the season without the late Luke Perry and how he plans to write off Perry’s character Fred Andrews on Season 4.

And speaking of the fourth season, which will feature the kids’ senior year in high school, Aguirre-Sacasa assured us Betty (Lili Reinhart), Archie (K.J. Apa), Veronica (Camila Mendes) and Jughead (Cole Sprouse) will actually be spending more time in the high school, mainly because that’s where the next big mystery will take place.

See our Q&A with the “Riverdale” boss below.

Let’s started with the end there. What can you tell us about that flash-forward to spring break of senior year, where Betty, Archie and Veronica are outside in front of a fire, in their underwear, covered in blood, Jughead is nowhere to be seen but they have his beanie and they three are swearing to never speak of this again?

Every year we try a different crime genre or a new trope of pulp or noir and we wanted to do something that focused on all of the kids for Season 4, because sometimes Betty is with the Gargoyle King and Archie is with Hiram and Jughead is doing something with the Serpents, and we wanted them to all to be included in this main story. And we wanted to do something that was sort of a little bit more like an homage to the ’80s and ’90s teen thrillers, like “Killing Mr. Griffin” or “I Know What You Did Last Summer” or the novels like “The Secret History” by Donna Tartt, that were more focused on the role of students and the school. We wanted to focus it on that.

Penelope was revealed to be the Gargoyle King (but also Chic, with some assistance from Hal Cooper)! How early on did you decide on her as the woman behind it all and when did you set up the kids’ being forced by Penelope to “survive the night” with that Gryphons & Gargoyles-themed game for the finale?

When we pitched the season, we pitched that the Gargoyle King and the plot of Gryphons & Gargoyles would tie all three seasons together: Seasons 1, 2, and 3. We wanted to tie all three seasons together and the crime that starts the series was the murder of Jason Blossom. So we wanted what we did in Season 3 to tie back to that. That meant that at the heart of the evil, at the heart of the problems that had been plaguing Riverdale for the last three years, it would be the Blossoms. So we landed on the Penelope piece pretty early. As for one big epic game that the kids have to play, we actually landed on that idea — we were talking about it for Episode 3 or 4, and then when we started talking about it more it felt like, “Oh, this is actually the finale.” So we just took everything we did for those and moved it to the end. So we had a lot of this early on.

Can you talk about how you decided to handle Luke Perry’s unexpected death in relation to “Riverdale,” as Fred Andrews has not actually written off yet and was still referenced several times in the episodes that were filmed after his passing?

It was a shock when Luke passed and we were bereft. And we had already pretty much planned the end of the season. We’d started writing the end of the season and we made the decision to not address it at the end of Season 3 because we felt it would be rushed. We felt it wouldn’t be the right way to honor neither Luke nor the character Fred. So we decided not long after the tragedy that we would wait and do a tribute to Luke and honoring his memory and deal with losing Fred Andrews at the beginning of Season 4. Luckily, Molly [Ringwald] was coming back as Mary Andrews in Episode 20. And we’d already planned for her to come back and we just asked her to stay through the end of the season. 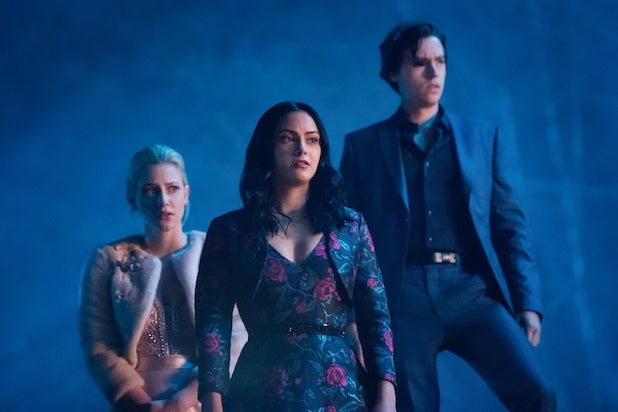 Next season will bring us to senior year, do you have a lot of big ideas for senior year-related plots and will we be in the actual school more?

I think I say this every year, and we don’t always do it, but knowing this is their last year in high school we’re really, really, really going to focus and set as much of our season as we can at the high school. We’re going to go through all those rites of passages that kids who are seniors do and really invest in the original franchises of these characters. In other words, Cheryl is gonna be a River Vixen, Archie is gonna be back on the football team, Betty is gonna be back on the school newspaper. All those things that we remember from our high school days, we’re really going to invest in them as well. And, like I said, our suspense element is going to be set in the high school.

The “Riverdale” spinoff “Katy Keene” was recently picked up to series and Josie (Ashleigh Murray) will be starring on it as an older version of the character, because it’s set int he future. Can you tell us if Josie will be coming back to “Riverdale” for flashback crossovers — or if there is a chance we’ll see “Riverdale” characters crossover into the future on “Katy Keene”?

I think it’s more likely that we will see “Riverdale” characters pop up in New York five years later. We think that that might be a little more fun, and less confusing, than Josie going back in time to visit Riverdale.

Can you tell us where Alice is now that The Farm has been vacated and we’ve learned she’s been working with the FBI — and her son Charles a.k.a. Betty and Jughead’s half brother! What will we find out about all that next season?

We’ve more or less told the story of The Farm. The one thing we haven’t yet done is extracted Alice from The Farm, so that’s a big loose end that we’ll address early on in Season 4.

Two questions about dead characters: 1) Is Hal Cooper really dead? 2) Jason Blossom is for sure dead, but now Cheryl has his corpse up in her attic — what is she doing with him?

So, I always say, never say never on “Riverdale,” but we do think Hal is pretty much dead now. As for Jason, Cheryl’s story began with Jason, our story began with Jason, we liked how we could dovetail back with Jason in the finale. I think it’s clear he’s dead but, you know, for Cheryl after she lost him and she lost him twice, she didn’t want to lose him a third time. It also places her back in a thing that we like, which is Cheryl as sort of a Gothic heroine.

“Riverdale” will return with its fourth season this fall on The CW.