(Warning: This post contains spoilers for Wednesday’s episode of “Riverdale,” “The Midnight Club.”)

“The world was a different place, and we were very different people,” Alice Cooper (Madchen Amick) says, while recounting a blast from the past story for her daughter Betty (Lili Reinhart) on Wednesday’s episode of “Riverdale,” a flashback centering around the parents in Saturday detention appropriately titled, “The Midnight Club.”

But it also manages to pack in many a reference to flicks from both the ’90s (the decade the clock is turned back to for the evening) and the ’80s (the decade in which John Hughes invented the teen movie).

Here TheWrap rounds up six of the best references in the tribute episode.

(Oh, and the fact some of the “Riverdale” parents are played by notable ’90s stars, like “Twin Peaks” alum Amick and “Beverly Hills, 90210” star Luke Perry, is just the cherry on top of this retro sundae.)

When it was announced Hall would play the principal in the flashback, it was clear Aguirre-Sacasa was going all in by booking one of the most well-known teen actors of all time. Second only to Molly Ringwald (a “Riverdale” parent who does not make an appearance in this episode) in the Hughes Hall of High School Cinema Fame, the actor is the living embodiment of ’80s movies.

2. The detention setting and opening scene

Which brings us to when Principal Featherhead is introduced. Hall enters the classroom — not a library, but we’ll take it — and tells the kids the rules for detention, also demanding they write a 1,000 word essay while serving time. The scene is a clear reference to Assistant Principal Vernon from “The Breakfast Club,” the show’s main homage for the evening (see poster below). See the iconic scene we’re talking about here.

3. Many a direct shoutout

Because it’s the ’90s, but we’re loving on the ’80s here too, the cast name drops several staples of both decades here. There are direct shoutouts to the 1988 movie “Heathers,” former couple Johnny Depp and Winona Ryder, Nirvana’s “Smells Like Teen Spirit,” phones with cords (if you didn’t know these were once a thing) among many other dated remarks that might make your parents feel old and remember their favorite movies from their teen years. Oh, and it’s clear G&G is a reference to Dungeons & Dragons — which became popular in the ’80s — right? OK, just checking you got that.

The Truth or Dare scene from “The Breakfast Club” is another not-to-be missed moment from the 1985 classic, in which stars Hall, Molly Ringwald, Judd Nealson, Ally Sheedy, Emilio Estevez sit on the ground in the library and get really personally. Secrets and Sins is just a fancier name for the way for the “Riverdale” parents to open up to each other about their less than perfect lives.

5. “A brain, and an athlete, a basket case, a princess, and a criminal”

There are six parents whose teen counterparts are the focus of “The Midnight Club” episode — with a few more who pop up as secondary characters — and five leads in “The Breakfast Club.” The kids never make a direct reference to the labels the “Breakfast Club” cast gives themselves in the letter read over the movie’s closing moments, but they pick on each other enough about their respective “cliques” and roles within high school society its clear who is what: Alice is a criminal, FP and Fred are jocks, Sierra and Hermione are princesses and Penelope is the brain. Wait, no basket case, actually. Well, maybe the part where everyone gets high while playing Gryphons and Gargoyles and someone may have murdered the principal makes them all that one.

6. The music, the hair, the clothes

From Billy Idol’s “Dancing With Myself” to Tears for Fears’ “Everybody Wants to Rule the World,” Alice’s rebel, grunge look to FP’s letterman jacket, the episode does a bang up job of throwing us into the past with its music and wardrobe selections. And the hair. OMG, don’t get us started on the hair. Yeah, we could cast any one of these kids in a “Sixteen Candles” remake right now.

OK, those are the references we rounded up before the episode kinda gets off  its tribute train track and becomes all about the mysterious death of Principal Featherhead and the Gargoyle King. But it was fun while it lasted. (And don’t you forget about it.)

“Riverdale” airs Wednesdays at 8/7c on The CW 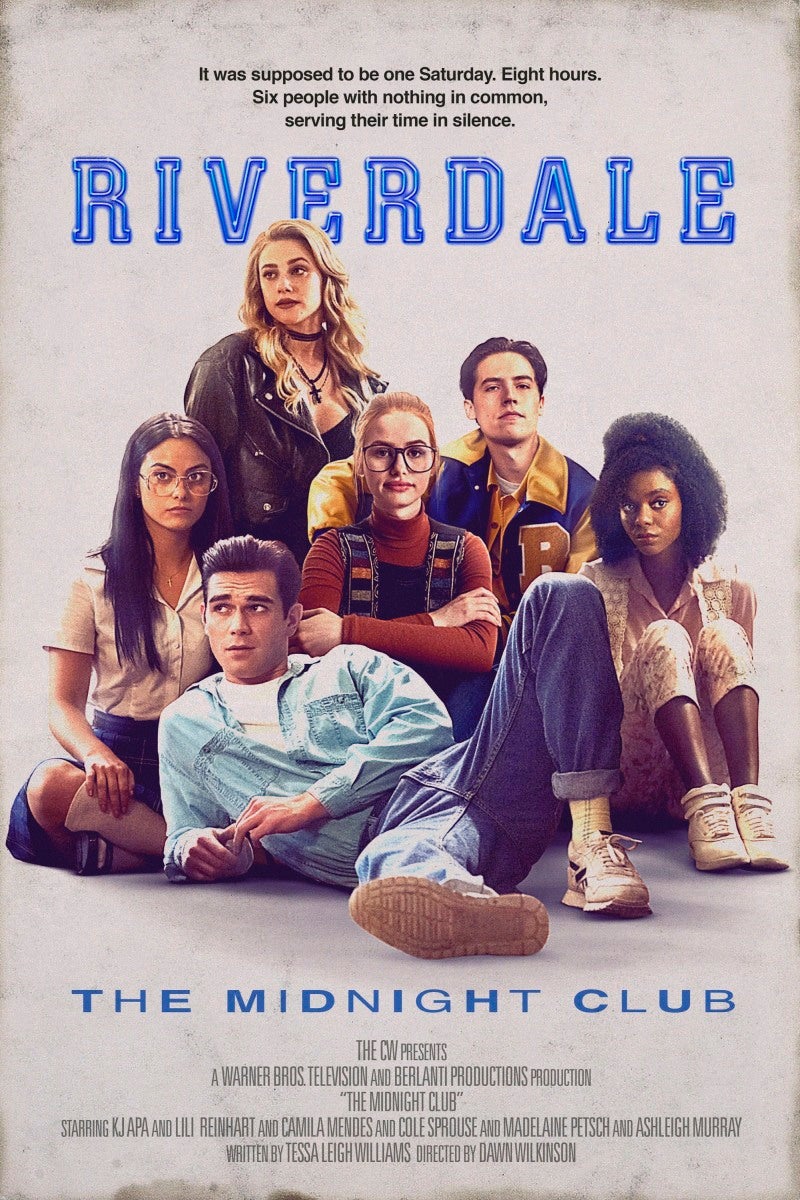