Madchen Amick and Lili Reinhart have played mother and daughter for four years now on The CW’s “Riverdale” and, as you might expect, they’ve developed a pretty close bond. For Amick, one of the best parts about that bond is how they’ve made a habit of looking out for each other’s mental health on set.

It became extra important for Amick during the pandemic, when COVID restrictions meant that she couldn’t visit her family while filming, because the show shoots in Vancouver. With Canada’s requirement of a two-week quarantine after entering the country, Amick couldn’t leave Vancouver, and it would’ve been difficult for her family to come see her. During those months, Amick found support in her on-screen daughter. 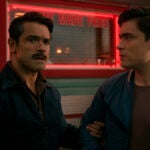 Mental health is a topic that’s been increasingly important for Amick in recent years. When her son was a freshman in college, she notes that he went through a “tragic event” that revealed he had a genetic predisposition to bipolar disorder.

“It was just a big wake up call for my family and I, that the resources out there aren’t available to people,” Amick said. “There’s so much stigma and shame attached to mental illness. I think that’s starting to change, people are talking about it more. I think this last year really like made us face what was going on. It was a really hard year for everyone.”

But Amick still wants to do more to help people, and that’s why she’s launched her ‘don’t MIND me’ foundation. With it, she hopes to not only help erase those stigmas, but make sure helpful resources are actually accessible.

“We’re attacking the conversation side and raising awareness,” Amick said. “But funds go directly to helping people in need.”