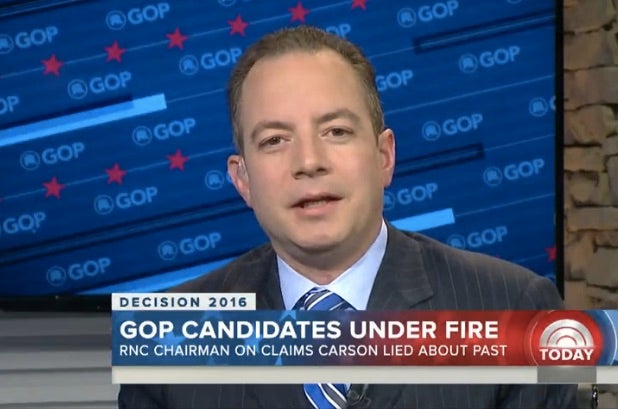 The head of the Republican Party defended Ben Carson on Monday against the media’s “crazy obsession” with the candidate and his past.

“I would imagine some questions are appropriate, but I do believe that this is a totally crazy obsession over incredible details from 30 and 40 years ago,” RNC Chairman Reince Priebus told Matt Lauer on “Today.”

He went on to suggest there’s a double standard for Carson compared to Hillary Clinton.

“The fact is we kind of wish the media would be just as obsessed or half obsessed with Hillary Clinton’s lies of many years about really relevant things, like people who have died in Benghazi and her emails.”

Priebus said coverage of Clinton was laughable as media offered a “laugh and a wink and a nod” in sympathizing with Clinton having to sit through a day-long Congressional hearing in October on the terrorist attack on a U.S. diplomatic compound in Benghazi, Libya.

Carson has come under heavy fire in the last week for apparently misrepresenting that he was offered a full scholarship to West Point along with holes being found in his account of being a violent juvenile.