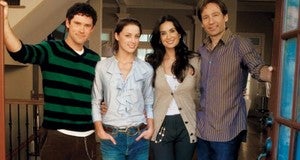 Moore and Duchovny play a seemingly perfect couple who move into an upscale gated community with their equally perfect teenagers, played by Amber Heard and Ben Hollingsworth. In reality, they’re not a family at all, but employees of a stealth marketing organization with the goal of making everyone else want what they’ve got.

“Not since ‘Thank You for Smoking’ has a comedy been so attuned to the current zeitgeist of American culture,” Howard Cohen, Roadside co-president, said in a statement. It "wrings great comedy from a central truth about Americans – we have an ongoing love affair with our stuff.”