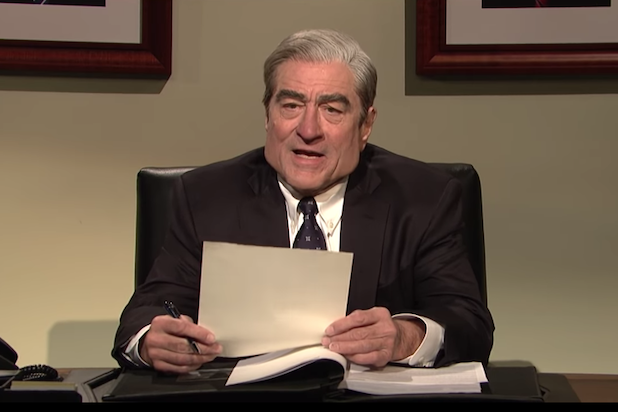 Robert De Niro evaluated Robert Mueller’s congressional testimony on Monday, writing in an op-ed for the Washington Post, “my approach to the part would have been different … I would have channeled my inner rage.”

De Niro portrayed the former special counsel on “Saturday Night Live” for over a year, so his critique of the former FBI director’s mannerisms comes from a months-long effort to study and emulate them, at least to a point.

He said Mueller’s choice to “play himself as a calm, confident, dignified public servant” while answering questions about his investigation into Russian meddling in the 2016 election was “a valid acting choice,” but not the one the two-time Oscar winner would have made.

“But I, more of a method actor, would have channeled my inner rage at the years of Donald Trump’s illegal and immoral acts, and I would have been more in touch with my fury after two years of Trump and his stooges accusing me of running a witch hunt,” De Niro wrote. “I would have dropped the unruffled exterior and been more, let’s say, expansive in my response. I may have dropped an F-bomb or two or eight.”

In other words, he would have made himself the focus, whereas “Mueller preferred to stay in the background, putting country and integrity first, and letting action and facts speak for him.”

De Niro, who previous called on Mueller to testify publicly, said he “couldn’t help but think that a public servant should not have to ‘perform’ to command our attention.”

Mueller’s testimony, whether seen as a performance or not, drew 13 million viewers across the major networks.

The Office of the Special Counsel did not immediately return a request for comment.