James Corden opened the Hollywood Film Awards on Sunday in Beverly Hills by noting the timing of the early awards show.

“It’s crazy that a ceremony this prestigious is taking place just two days before the presidential election,” the CBS late night host said.

“The only difference is, tonight is actually rigged.”

Hours before the polls open across the country, 44 Oscar hopefuls ranging from actors (Natalie Portman, Matthew McConaughey, Nicole Kidman, Tom Hanks) and directors (Mel Gibson and Clint Eastwood) to costume designers (who were kept off stage) slipped on elegant fashion for a non-voted, non-televised, awards season exhibition game at the Beverly Hilton. 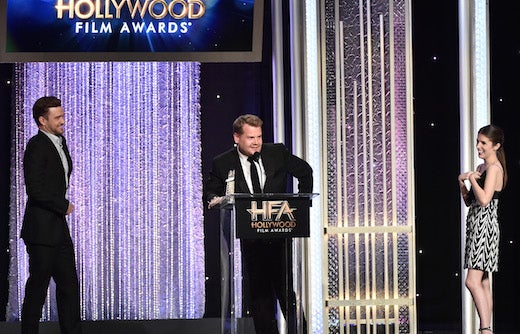 “Even the name sounds made up,” Corden continued. “A ‘Hollywood Film Award’ sounds like something Michael Bay gives to himself on Christmas morning just to feel less alone.”

On its face, the glittery and hollow spectacle with canned teleprompter intros and tributes for some movies that have not yet been released smacked as tone deaf. The country and the world outside the Beverly Hilton is focused on election day.

Inevitably, the real world crept in.

Also Read: Robert De Niro Destroys Trump: “I’d Like To Punch Him in the Face” (Video) 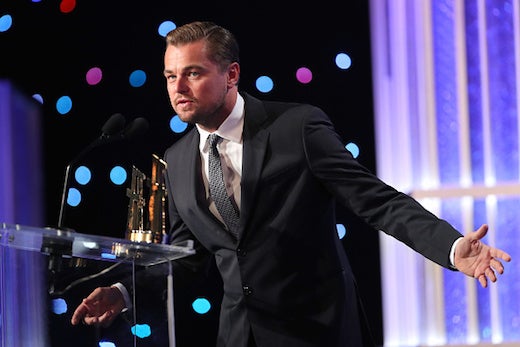 Leonardo DiCaprio accepts for “Before the Flood”. (Christopher Polk/HFA2016/Getty Images for dcp)

“I know we’re here to celebrate movies in Hollywood and no one throws an industry party better than Carlos de Abreu and Dick Clark Productions,” said De Niro, the star of “The Comedian.”

“But it’s two days to a frightening election and the shadow of politics is hanging over us whether we like it or not and its hard for me to think about anything else.”

“This could be the last award ceremony before the apocalypse,” Corden joked.

Also Read: Jessica Chastain Says Trump Voters Are 'A Punch In the Gut' to Women 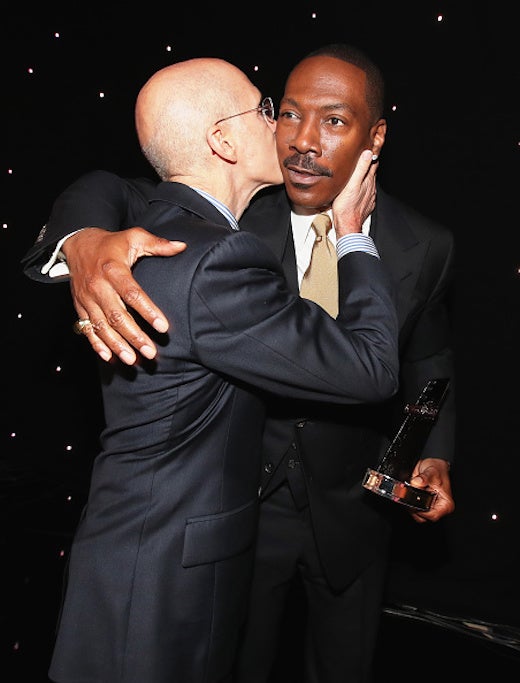 Here’s TheWrap’s roundup of the top political statements from Hollywood’s final major gathering before the election.

“So let me just lay it out right here. We have the opportunity to prevent a comedy from turning in to a tragedy. Vote for Hillary [on] Tuesday.”

Leonardo DiCaprio, accepting an award for his climate change documentary “Before the Flood”:

“If you don’t believe in the science of man-made climate change, you may as well not believe in gravity,” the Oscar-winning star said.

“All of us need to act. All of us in this room. Besides all of us here, if by chance this clip is televised, let’s all our use our powers as citizens and do the right thing. Please vote this Tuesday, November 8.”

Fisher Stevens, DiCaprio’s directing and producing partner on “Before the Flood”:

“The film is free,” Stevens said, noting its availability online. “It will continue to be free until the election-slash-reality show is over. Sadly, one of our candidates does not believe in climate change. The other one does. So let’s get out there and hope that after Tuesday, Trump is dumped.”

“All I would say is that your voice is your vote,” the outgoing DreamWorks Animation boss said. “Every single vote counts. Please don’t forget. Get out there and vote.”

At one point, Corden asked for a show of hands of any Trump supporters in the room. Only two people raised their hands. One woman on the side stood up and danced, before Corden mocked her for playing to type. The other guy took down his hand.

“This year, they rebooted the Clinton presidency with a female lead ,” Corden joked, mixing studio development speak with politics. When this got a laugh from the crowd, he had a follow-up:

“[That joke’s] always a crowd-pleaser …unless you’re seated with Clint Eastwood.”

Bryan Cranston, Miley Cyrus and others may be headed overseas if they don’t get their way on Election Day

It's not uncommon for people to joke/threaten about leaving the U.S. if the "wrong" person becomes president. But Donald Trump has Hollywood in such a froth that loads of celebrities are now talking about pulling up stakes. Here's a small collection of them, ranging from silly jokes to serious plans.