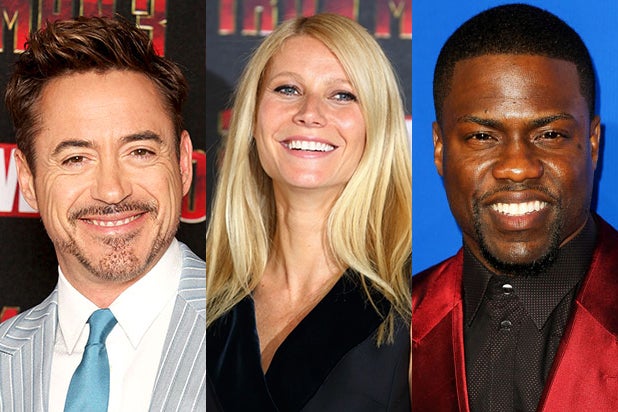 The two “Iron Man” co-stars and the “Ride Along” actor will be just a few of the Hollywood heavyweights taking the stage during Sunday’s live broadcast on NBC, which Tina Fey and Amy Poehler will host for the third year in a row.

Downey has won three Golden Globes over the span of his career, most recently for “Sherlock Holmes” in 2010. Paltrow has been nominated twice and won in 1999 for her role in “Shakespeare in Love.” Hart, meanwhile, joins Faris, Pratt and Tatum as presenters who have yet to secure a nomination.

What do Dakota Johnson & @JamieDornan have in common? Many correct answers. Here’s one: They’re presenting at the #GoldenGlobes on Sunday.

As TheWrap previously reported, Alejandro González Iñárritu’s “Birdman” was the most heavily nominated film this year with seven nods, while “The Imitation Game” and “Boyhood” scored five each. On the television side, FX’s “Fargo” led the pack with five nominations and HBO’s “True Detective” is close behind with four.

The 72nd Annual Golden Globes will be broadcast live from the Beverly Hilton in Beverly Hills, California on Sunday at 8 p.m. ET on NBC.