On Monday, real estate heir Robert Durst described the moment he found Susan Berman’s body in her Benedict Canyon home, testifying that he found her laying on her back with her hair covered in liquid.

Durst is on trial for the murder of Berman, his close friend and confident who was killed on Dec. 23, 2000. In March of last year, Durst’s attorney Dick DeGuerin told the jury it was actually Durst who found Berman’s body.

Talking to DeGuerin, Durst explained that he got to Berman’s house with plans to drive up to San Francisco to check on a townhouse project they were working on. He saw a piece of paper attached to the front door that said “Bobby, I am doing my walk, be back in an hour, Suzy.” He had a key, so he walked around the house and walked out the back door to the backyard, and didn’t find her. Then, he heard a bunch of honking, so he walked to the front of the house thinking there had been an accident. 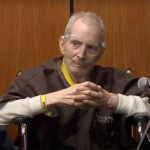 There wasn’t, he said, and when he turned back towards the front door, he noticed the front door was open and the note was gone. He could not remember whether he had left the door open or not, but when he got to the first bedroom, he “did a double take” because he “saw Susan lying on the floor on her back.” He described her as being cold and her hair being in some sort of liquid that he figured was blood.

“I did not imagine at that time that she’d been shot,” he explained. He went to call 911 but discovered the phone was dead; he got in the car to find a payphone to call 911. He did not give his name to the dispatcher because he didn’t want to be identified, so he decided to instead write a letter to the Beverly Hills Police Department saying Susan was dead in the house.

He described that he felt a little hungover from taking Percocet for a migraine earlier in the day. He had pen and paper in his car, but he did not have envelopes or stamps. Although he has no recollection of doing that, he, said he “must’ve.” However, in evidence photos, there was a box of envelopes in Berman’s house, but Durst said he doesn’t remember where he got the envelope and stamp. 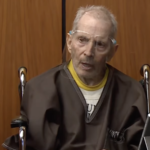 “Did you lie about it?” DeGuerin asked. “Yes,” Durst said.

“Did you lie about it for years?” he followed up.

Durst answered, “Yes, because it’s a very difficult thing to believe. I have difficulty believing it myself that I would write the letter and I did not kill Susan Berman.”

He decided he wanted to get away from Los Angeles, so he drove to San Francisco. He then decided to fly to New York because he had New Years plans in the city.

Watch the livestream above.