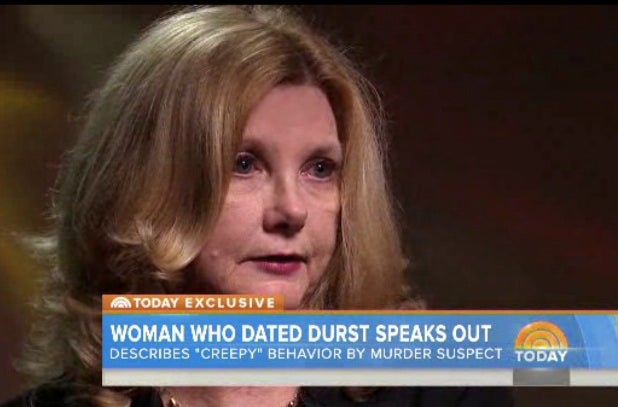 More details about Robert Durst’s background and suspicious activity creeped out on “Today” Wednesday, as the alleged murderer’s ex-girlfriend revealed several lies Durst told her, as well as unsettling items lying around his apartment.

Linda Walker Zevallos told NBC’s Stephanie Gosk that she met Durst on an airplane, where he told her he was a labor lawyer with two daughters who went to Harvard — both claims were false.

Candace Evans, a real estate writer who spoke to Durst’s building manager, told NBC he wanted the concrete floors because he “used a lot of chemicals.”

“I have no idea, but it’s extremely creepy,” Evans said to NBC.

Durst also behaved strangely during routine activities with Zevallos. While driving with her and her 13-year-old son, Durst said he forgot he had two guns in the backseat, telling the teenager not to touch them.

He also kicked her under the table at a restaurant because she tried to order the same meal as him.

And Zevallos recounted Durst talking about his friend, Susan Berman, who was “having some problems” that would require him to go out there and see her.

Durst is suspected of killing Berman execution style. “A light bulb went off — oh my,” Zevallos said when she learned of Berman’s murder.