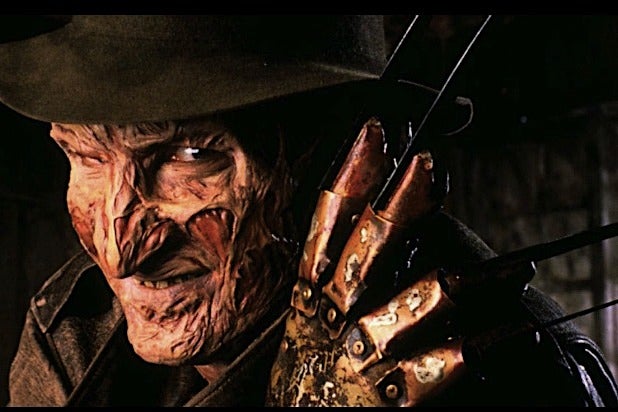 Freddy Krueger is back to terrify teens when Robert Englund brings his razor-clawed serial killer to “The Goldbergs” for its Halloween episode on Oct. 31.

In a promo for the ABC family comedy set in the ’80s, Beverly (Wendi McLendon-Covey) nonchalantly introduces Fredward, as she calls him, and asks, “Is there a Mrs. Krueger? Because I have a Rolodex.”

Patting him sweetly on the arm, she adds, “He’s just enchanting, very well-mannered,” then points out they have something in common. “We get our nails done at the same place.”

Poor Bev. She must be oblivious to Freddy’s history of creeping into the dreams of teenagers and slashing them to pieces. Being the mama bear whom she has proven to be when it comes to her three kids, she just might be the one person that can actually take him down.

The last time Englund played the dream demon in a substantial way was in 2003’s “Freddy vs. Jason,” which pitted his “Nightmare on Elm Street” character against Jason Voorhees, the hockey-masked horror in “Friday the 13th.”

Jackie Earle Haley took over the role of Freddy in the 2010 franchise reboot.

“The Goldbergs” returns for its sixth season on Wednesday, Sept. 26 at 8 p.m. ET on ABC.

#TheGoldbergs Halloween episode this year is going to be a NIGHTMARE! @RobertBEnglund will guest star as the one and only Freddy Krueger! pic.twitter.com/JduaQYqeiP