Left-wing documentary firebrand Robert Greenwald Thursday challenged actors Greg Kinnear and Katie Holmes — who were cast this week to play John F. Kennedy and his wife Jackie in a History Channel miniseries about the Kennedys — to "insist on a historically accurate and politically unbiased script." 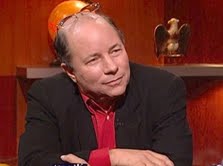 In February, Greenwald corralled a group of prominent historians including former Kennedy advisor Ted Sorenson who in a video took objection to the script, calling it a politically motivated "character assassination."

The eight-hour miniseries is being produced by Joel Surnow, the executive producer of the hit action-torture series "24" and an outspoken political conservative.

The miniseries is scheduled to air in 2011 and marks the channel’s first foray into scripted drama. It is also in keeping with the network’s move to broaden its audience and attract younger viewers — a decision that seemed to pay off earlier this week when the channel recorded its biggest ever ratings for Sunday’s premiere of "America: The Story of Us."

At the time of the February broadside, the channel defended the project, saying the historians had seen an early draft and that History’s standards for historical accuracy "are more rigorous than the broadcast networks."

With the high-profile casting of Kinnear and Holmes this week to play the lead characters, Greenwald again went on the offensive.

"I hope that the History Channel has since edited out the historical inaccuracies and the politically motivated character assassination that were part of the original script," Greenwald said. "Respected actors Greg Kinnear and Katie Holmes must insist on a historically accurate and political unbiased script."

A spokesperson for Kinnear and another for Holmes did not respond to immediate requests for comment, nor did the History Channel.

The historians’ objections include what they said were factual errors and scenes designed to emphasize a salacious side of the president. In a New York Times story, they said the script featured fictional scenes "like an exchange that suggests Kennedy came up with the idea for the Berlin Wall."

Sorensen says in the video, “Every single conversation with the president in the Oval Office or elsewhere in which I, according to the script, participated, never happened.”

“The Kennedys” does "everything in its power to demean and make them quite disgusting figures,” Greenwald said at the time.

In response at the time, the miniseries’ writer Stephen Kronish said any innacuracies would be removed.