As the news cycle continues to be dominated by locker room talk degrading women and allegations against a presidential candidate, the espnW: Women + Sports Summit 2016 was a refreshing breath of fresh air this week.

Featuring ESPN’s best female talent, athletes at the top of their game including Olympic medal winners recently back from Rio, and a packed itinerary of key note speakers, the seventh annual event at the Monarch Beach Resort in Dana Point, California, set a positive tone with the mantra “vision, action, impact.”

“It is always so gratifying after every summit we’ve had because we’re always at a stage of evolution, but this year felt extra special,” Laura Gentile, senior vice president, espnW and Women’s Initiatives, told TheWrap on Saturday as the three-day event came to a close. “The women are so engaged in our content and believe in what we’re building, there’s such unity and the feeling of ‘lets work together and make this world better for women.'”

While the current political landscape makes this seem like the perfect weekend for an empowering women’s event, “we’ve been saying [it’s the perfect time] every year,” Gentile (below) explained. “There is so much momentum behind women in sports, women in business and women in the industry picking up. Every year we have had this summit we’ve said ‘it’s the year of the woman.’ Ideally, we’re just gaining more steam, more momentum and more power.” 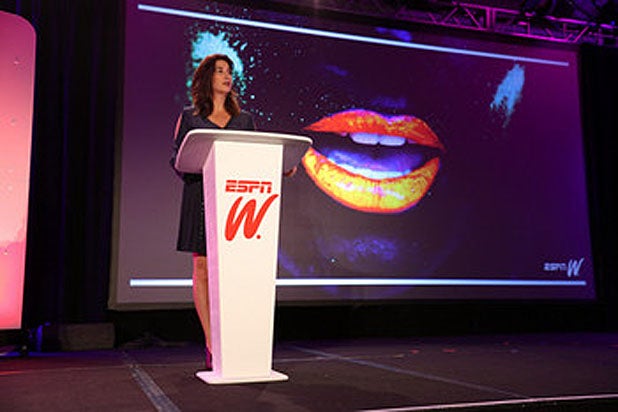 What the espnW team was most excited about was the diversity of speakers at this year’s summit, “Whether it is Nikky Finney’s poetry, panels talking about social media harassment, or really looking at the health and wellness industry from a banker’s perspective — we really covered the total landscape and I am proud of that,” Gentile said.

“We planned this for 12 months in advance, so none of this is a knee jerk reaction” to the current social landscape, she explained. “We put a ton of energy into thinking about what are the central topics in the sports world right now, and what are universal themes, like leadership, empowerment and women finding our voice.”

One of those hot topic discussions on the schedule this year was titled “Mean Tweets + Social Media Harassment” with the Jemele Hill, Kelley and Kavitha Davidson from ESPN’ Radio’s “The Trifecta,” moderated by the self-proclaimed “unf–kwithable” Sarah Spain (pictured below left). 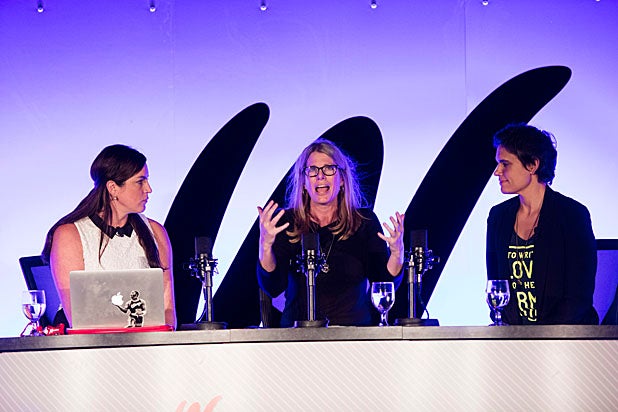 Undoubtedly the biggest name of the weekend was “Good Morning America” anchor and former ESPN host Robin Roberts (top), who captivated the entire ballroom on Friday night by sharing her words of wisdom — both as a woman in a male-dominated industry and her personal health struggles. “Make your mess your message, ” Roberts said about her public battle with breast cancer.

Another of her messages was: “When you strut you stumble,” warning the audience never to get too cocky by recalling an interview with President Obama, which she thought her producer was going to praise her over afterwards — but instead he came up and revealed she had lipstick on her teeth. 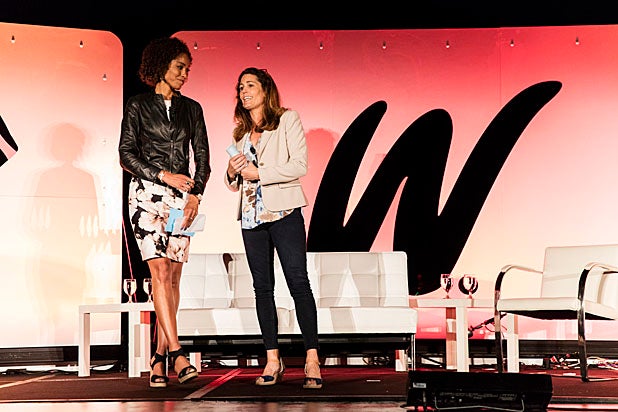 After making event host and “NBA Countdown” anchor Sage Steele (above left) cry as she recalled how Roberts supported her when she was a fledging reporter, the media veteran closed out with these wise words. “You won’t remember everything that was said and done this week, but please remember this feeling at the summit,” she said. 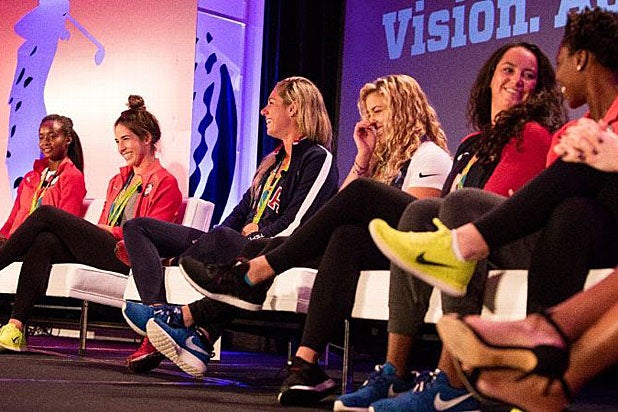 From accidentally kissing old Russian men on the medals’ podium to scaring kids on planes with balloon animals, and getting locked out of hotel rooms naked, the elite athletes shared their most embarrassing stories before telling true tales of inspiration.

“Being an Olympian isn’t about the title, it’s what you do with it,” Steffens said, adding that as an Olympic athlete, “now your last name is United States of America.”

Teammate Johnson, who is first black woman to play on the U.S. Olympic water polo team, added that one key to her strength is, “knowing that you can lose at any time and you’ll still be the same person.” 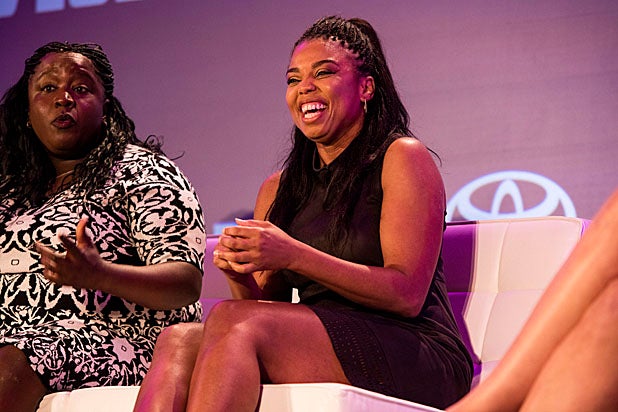 Muhammad has gotten a lot of attention for being an uncovered Muslim athlete, but said she didn’t get a lot of attention for it until a reporter pointed it out. “At the end of the day, you are who you are, and you don’t realize the impact you have on other people,” she said. “It’s my every day life and not something I purposefully did,” adding that the decision not to cover up all “buckles down to character.”

Harrison can take on any rival on the matt and keeps her gold medal in her socks, but like one in four women in America, she is the victim of sexual assault.

“I was sexually abused my first coach, he was convicted and is now in prison,” she told the audience. “I started telling my story before the Olympics in London, then realized there wasn’t anywhere for the victims of this epidemic to turn, so I started the Fearless Foundation to educate them. I want it to stop being a taboo,” Harrison pledged.

Even as a rarity in her sport, Johnson said she never thought her race defined her when she was young. “I just wanted to be an athlete,” she admitted. “When I got older, I realized I was a representative for my race in my sport, now I embrace that.” 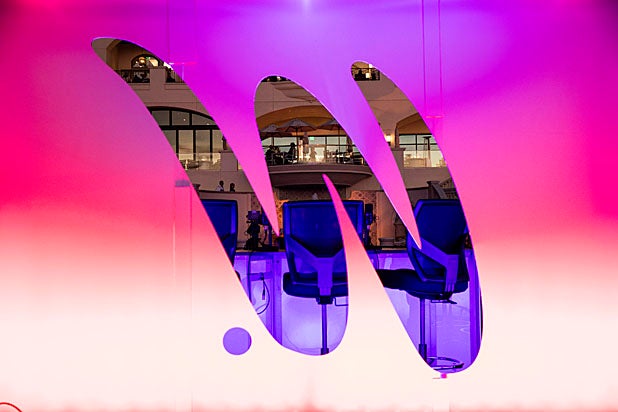 “Women in Leadership” was the theme of Saturday morning’s breakfast, with powerful executives from Google, Verizon, Target and Ketchum taking center stage to talk about being brave and bold in the business world, breaking the rules, and always putting people first. The key to her success is “a combination of fearlessness and stubbornness,” Ann Wool, Senior Vice President, Ketchum, said, while moderator and Hall of Fame soccer player Julie Foudy admitted “it took me until 40 to own my awesome and know that I am OK with it.”

New espnW/ESPN reporter and Paralympic medalist Victoria Arlen has definitely found her awesomeness, but at age 11, she had completely lost her power of speech and movement. In an emotionally-charged segment titled “One Huge Step: From Wheelchair to Walking,” Arlen shared how she suffered from Transverse Myelitis and Acute Disseminated Encephalomyelitis, autoimmune disorders that caused swelling in her brain and spinal cord and left her paralyzed. “I was literally locked in [my body],” she said.

“Life happens every single day, but it’s what you do when your world comes crumbling down that you learn how to make it or break it,” the now 22-year-old said.

“I was up here on stage on a panel three years ago in a wheelchair,” she recalled. “I never thought that today I would be standing here and working for ESPN. All you need is one blink of hope.” Arlen told TheWrap that after learning to walk again and even going surfing on Friday, her next goal is to run a marathon, which is pretty impressive for a girl who 11 years ago could only blink her eyes to communicate.

“Face it, embrace it, defy it, conquer it,” is her motto, and she certainly lives up to that.

Stories like Arlen’s are the core of the essence of the espnW summit. “We really try to create the anti-conference,” Gentile told TheWrap. “For everything people hate about conferences, we do something different. It’s a wonderful expression of the brand.”

The 2017 espnW: Women + Sports Summit will take place Oct. 2-4 at the Resort at Pelican Hill in Newport, California, and a special one-day event hosted by Sarah Spain returns to Chicago in May.

Watch espnW’s Alyssa Roenigk and Julie Foudy share their favorite moments from the 2016 summit below.