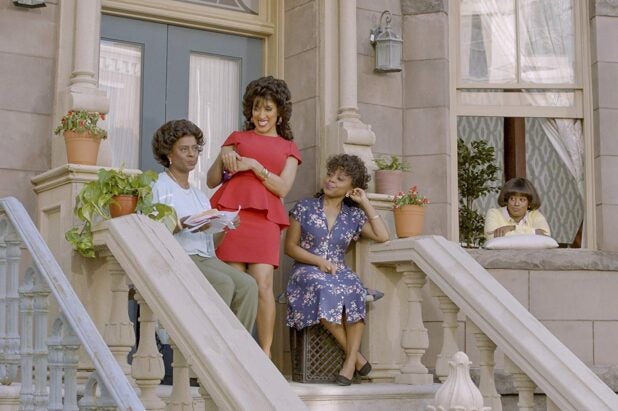 When Robin Thede’s BET late-night show “The Rundown” was canceled in July 2018, she wasted no time in finding her next project, the HBO sketch comedy series “A Black Lady Sketch Show.”

The comedian, whose career started with sketch and improv comedy at The Second City theatre group in Chicago, had already been soft-pitching a sketch show to work on between seasons of “The Rundown.” The day the BET show was canceled, she got a call from Issa Rae about what she planned on doing next, and had her answer ready to go.

“I just wanted to create a really authentic product, something that was uniquely from our point of view,” said Thede. “I set out to highlight black women living grounded experiences in a magical reality.” When she told the “Insecure” star about her vision, Rae immediately offered to take the show to HBO.

“We pitched it a week and a half after ‘The Rundown’ got canceled, and [HBO] bought it at dinner,” Thede said. “No pilot, no nothing, just straight to series, which is amazing.”

The show’s turnaround meant that casting and assembling a writer’s room had to happen quickly. When casting the ensemble, Thede looked to comedians she knew, but hadn’t worked with previously, eventually bringing on Ashley Nicole Black (who was also on the writing staff), Gabrielle Dennis and Quinta Brunson.

“I know that there are so many talented black women here in front of and behind the scenes, so it was also important to me that we had an all-black women writers room and a black woman director,” she said.

Dime Davis was hired as series director and Lauren Ashley Smith as head writer. The writers’ room was a whos-who of black female comedians, including “Late Night with Seth Meyers” writer Amber Ruffin, “The Nightly Show with Larry Wilmore” correspondent Holly Walker, Rae Sanni, Brittany Nichols and Akilah Green. Even for a writers room veteran like Thede, working in a room of all black women felt noticeably different.

“All the women in that room have been in all-white writers rooms before, and several of us have been all-white, all-male sketch comedy rooms at some point in our careers,” Thede said. A 2017 UCLA report found that less than 5 percent of TV writers are black and that 17 percent of writers rooms had one black writer. The WGA found that women represented 36 percent of writers hired during the 2017-2018 staffing season.

Working with other black women allowed the writers to fully realize their comedic voices without worrying about being tokenized or forced to explain the context of a joke.

“When you are able to write for someone who looks like you and wants through life similarly to you, it frees you up to take the comedy to an absurd place,” Thede said. And even though the show is entirely by black women, the humor isn’t exclusive.

“I think some people’s misconceptions are that every joke is going to be about black hair care, or, you know, whatever they think matters to black women, but that’s not the case,” she said. “The whole purpose of this show is showing that we can write all sorts of comedy. We can be raunchy, we can be sweet, we can be terrible…can be anything.”