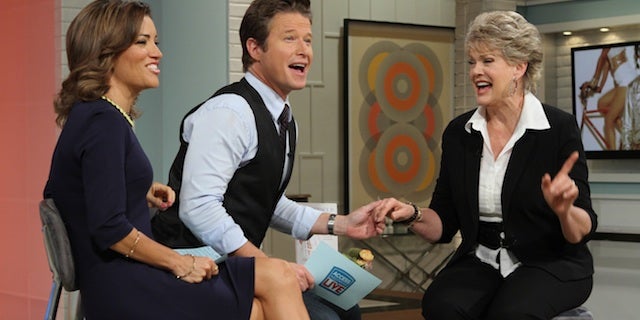 It doesn't matter that Robin Thicke is a grown man. His mom, former "Days of Our Live" star Gloria Loring, is defending her kid.

While Thicke's single, "Blurred Lines," is blowing up the radio airwaves, there has been some criticism that the song and video (which has two versions – one with the women clothed and an unrated one in which the women are topless) is degrading to women.

"As far as I'm concerned, there's nothing to be embarrassed about," Loring told Access Hollywood Live while promoting her book, "Coincidence Is God's Way of Remaining Anonymous."

"First of all, these girls are saying 'Excuse me' and they're like walking past, ignoring them, and the guys are going 'Whoa, Hey, hey, hey.' And that's like guys. I don't care how old they are, if they're in their 80s. A beautiful girl walks by, they strip them down to the see-through plastic and they look," she added.

Loring goes on to point out that the three artists on the song and video – Thicke with rappers T.I. and Pharrell – are happily married men. Her son has been married to actress Paula Patton for eight years.

“You don’t live with Paula Patton if you don’t respect women," Loring pointed out, "’cause you won’t keep a woman like Paula Patton!”

In his own defense, Thicke said on NBC's "Today" last month that he considered the song a "feminist movement."

"If you listen to the lyrics, it says, 'That man is not your maker.' It's actually a feminist movement within itself," he said. "It's saying that women and men are equals as animals and as power. It doesn't matter if you're a good girl or a bad girl, you can still have a good time."

Watch Loring defend "Blurred Lines" in the video below: