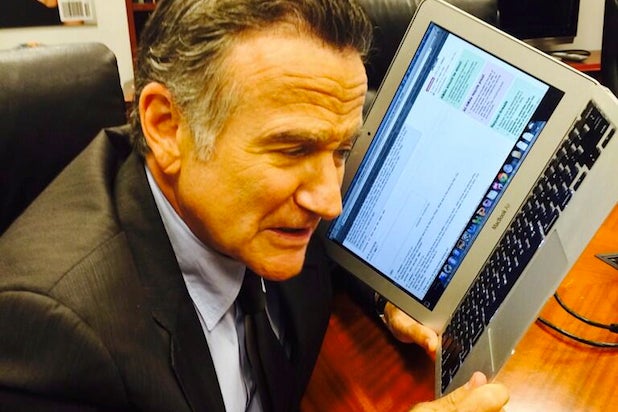 Robin Williams returns to television on Thursday in the new CBS sitcom “The Crazy Ones,” and rallied his fans on Wednesday during his first Ask Me Anything session on Reddit.

Although it was his first time on the popular online platform, he came prepared with plenty of honest answers, behind-the-scenes anecdotes from some of his biggest movies, and his trademark wit, of course.

“I am ready now for your questions. First time caller? Yes or no. What are you wearing?” Williams wrote in a welcome message to curious participants. “No, but seriously, I am excited to be here and exploring this medium.”

Also read: 7 Things We Learned About Stephen King From Reddit

Here are 10 things we learned about the Oscar-winner through his entertaining and honest exchange with some of his biggest fans.

1. Jack Nicholson is the comedian’s favorite celebrity to impersonate, and thinks Dana Carvey does the best impression of himself, too.
“Oh my god, Jack Nicholson. He once was with me at a benefit and leaned over and said ‘even oysters have enemies.’ In a very intense voice. I responded with, ‘increase your dosage,'” Williams wrote. “Dana Carvey does my personal favorite impression of myself. It’s accurate. And kind.”

3. Williams is also a fan of Nintendo’s video game series, “Zelda,” (he named his daughter Zelda, which was a suggestion from his son Zachary) as well as music from Tom Waits, Radiohead and Prince.
“‘Ocarina of Time’ is the best,” Williams said of his favorite game in the long-running franchise. “To be honest, I’m kind of challenged in terms of new music. I listen to a lot of Jazz, specifically Keith Jarrett piano solos. And for me, if you want just wonderful ballads and love songs, Tom Waits. I might also have to throw in Radiohead, but I can’t quote specific lyrics. AND PRINCE! For those special nights.”

4. “What Dreams May Come” was one of the hardest acting roles Williams ever had, and although he thought the final cut was “extraordinarily beautiful,” the ending was a bit of a disappointment.
“Every day was literally hell, because of the nature of the subject matter, dealing with death and being in hell literally. When I watched the final movie, I felt it was extraordinarily beautiful but I felt disappointed by the ending,” Williams wrote. “There was a different ending that they shot that I felt was much more true to the story. It was about reincarnation, basically, that they were going to meet again. The movie ended with two babies being born simultaneously, one in Bombay and one in the United States, and they held them up, and then the screen went to black.”

6. Williams is an avid cycling enthusiast.
“My favorite thing to do is ride a bicycle. I ride road bikes. And for me, it’s mobile meditation.”

7. Bobcat Goldthwait, the director of “World’s Greatest Dad,” and Peter Weir (“Dead Poets Society”) have been Williams’ favorite filmmakers to work with so far. And he can’t wait to work with comedian Patton Oswalt.
“My favorite person to work with as a director was my friend Bobcat Goldthwait. My other favorite director would be Peter Weir. It’s hard to pick a favorite actor because I’ve been so blessed to have worked with so many great ones,” Williams wrote. “People I’d love to work with in the future? Oh, let’s see… I’d love to do a movie with Patton Oswalt. Just because I think he’s such a gifted standup but also a really, really great actor.”

8. If Williams wasn’t friends with Christopher Reeves while attending Juilliard, he might have starved to death.
“Him being such a great friend to me at Juilliard, literally feeding me because I don’t think I literally had money for food or my student loan hadn’t come in yet, and he would share his food with me,” Williams wrote of his best memories of his friendship with the “Superman” star. “And then later after the accident, just seeing him beaming and just, seeing what he meant to so many people.”

9. Williams will never forget what it felt like to fly on the set of “Hook.” He’ll also never forget how hard a few people had to work to help him do it.
“Flying,” Williams said of his most memorable moment of starring in the Steven Spielberg fantasy film. “I only felt bad for the five guys who had to haul my fat ass up. At that time there were very few mechanical devices so it was literally guys on pulleys flying me across — I think it was 2 guys to pull me across. They would say, ‘We’re doing another take’ and they would say, ‘Oh not again.'”

10. Even after playing a boy who becomes trapped in the jungle after an unfortunate role of the dice during a board game called “Jumanji,” Williams would probably throw caution to the wind and play the game if it existed in real life.
“Yes, I would I think,” Williams wrote. “Because the idea of a survival adventure on that level, with more solving problems versus run and gun, it would exciting.”