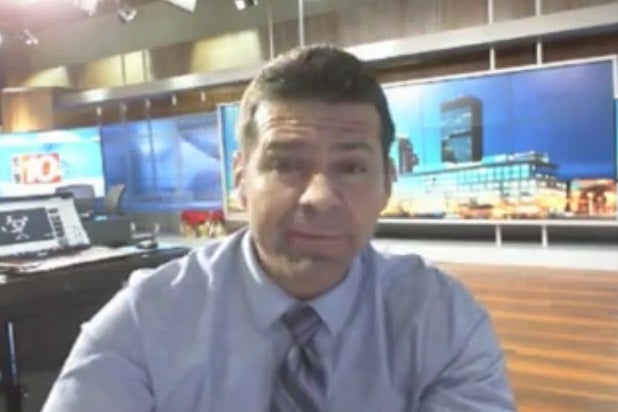 A Rochester, New York meteorologist fired for what his manager calls a racial slur said it was an accidental “verbal slip” he would never have made intentionally.

In a message Monday, WHEC News10NBC general manager Richard A. Reingold said that the station’s broadcast of the word “disheartens and disgusts me,” and “that it was not caught immediately is inexcusable. I regret that we did not immediately interrupt our broadcast and apologize on the spot.”

“As a result of that broadcast, meteorologist Jeremy Kappell is no longer with News10NBC,” Reingold said in a statement. “Our Friday broadcast does not represent the values of News10NBC, its hardworking staff, or the great people of Rochester. Dr. Martin Luther King, Jr. is one of America’s greatest heroes – for whom I, and all of us at News10NBC, have the utmost respect. I am terribly sorry to all of our viewers. We are redoubling our efforts to ensure that this never happens again.”

The broadcast drew criticism from Rochester mayor Lovely Warren, who called for Kappell’s resignation. A joint statement released by Warren, council president Loretta Scott and the Rochester City Council on Sunday read, in part, “It is wrong, hurtful and infuriating that WHEC Channel 10 broadcast a racial slur in reference to Dr. Martin Luther King, Jr. during its Friday News broadcast. It is beyond unacceptable that this occurred. There must be real consequences for the news personality involved and also for the management team that failed to immediately apologize and address the slur,” according to WHEC.

In a tweet on Monday, Kappell wrote, “You are out of your mind to think I would jeopardize future of my family and career to insert a racial slur against the GREATEST civil rights leader of all time?!?!”

In subsequent tweets, Kappell characterized the moment as a “verbal slip,” a “flub” and “unintentional bubbling.”

You are out of your mind to think I would jeopardize future of my family and career to insert a racial slur against the GREATEST civil rights leader of all time?!?! #Ridiculous #Hateful #Judgemental and #youdontknowthefirsthingaboutme! https://t.co/pjlBIaKGhE

Thank you will. There are some very notable cases of the exact same verbal slip including ESPN’s Mike Greensburg. Only he got to keep his job… https://t.co/iPo2NkYbeq https://t.co/5IQOG3pgG8

Yep, just like Mike Greensburg of ESPN. And like Mike, I feel terrible for ANYONE who may have been offended by my unintentional bubbling… https://t.co/iPo2NkYbeq https://t.co/0DM1cgtsTZ

"Today" Show Ambush
NBC's morning anchors got pranked by an employee hiding in a trashcan, armed with an airhorn.
View In Gallery