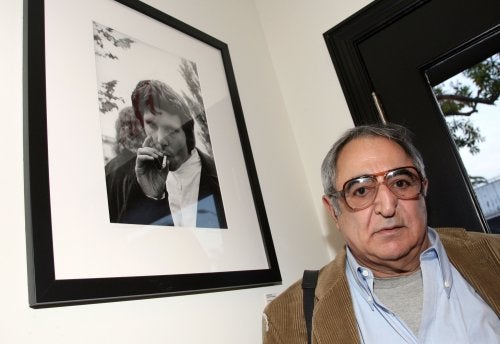 Rock photographer Jim Marshall, who captured music legends like Bob Dylan and Jimi Hendrix in both their onstage glory and offstage private moments, died Wednesday. He was 74.

Marshall reportedly died in his sleep in his New York hotel room, but no cause of death was given.

Perhaps his most famous photographs were the ones that Marshall took of the Beatles in one of their final public performances in San Francisco’s Candlestick Park in 1966, where he was the only photographer allowed backstage. He also served as the chief photographer at Woodstock, and captured the iconic shot of Jimi Hendrix setting his guitar on fire during a performance at the Monterey Pop Festival.

John Coltrane, Jim Morrison, Janis Joplin, and Johnny Cash, the latter for whom Marshall provided the album cover for "Live at San Quentin," were just a few of the greats who passed in front of the photographer’s camera.

Marshal never had any children, and often remarked that part of the reason he never had a family was that he was totally devoted to his work. Given that, it is perhaps fitting that the California native was in New York City this week was to promote his new photo book, “Match Prints,” a collection of some of the most notable photos snapped by both Marshall and his long-time friend Timothy White.