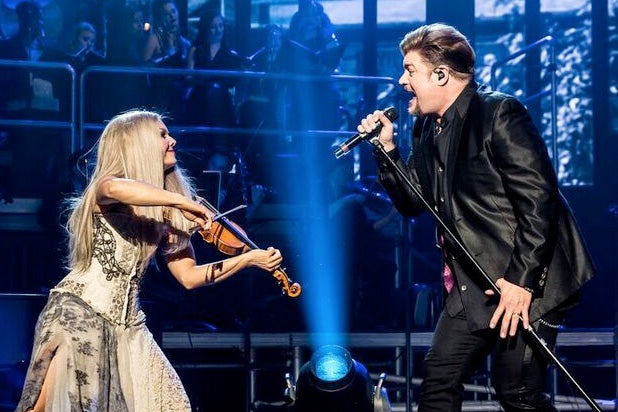 The most rock ‘n’ roll thing about “Rocktopia,” a misbegotten new concert mashup of classical music and rock standards that opened Tuesday at the Broadway Theatre, comes in the second act, when one of the chorus members perched on a riser on stage right whips out his orange cellphone and starts recording as Chloe Lowery belts out “I Want to Know What Love Is.”

The chorus singers are all members of the New York Contemporary Choir dressed as if they’re going to hit the clubs after the show, and definitely not the same clubs. They’re also the most enthusiastic people on the stage, grooving to the beat and pumping their fists throughout a two and a half hour production.

I wish I could say the same thing. Maybe it’s that the very concept of “Rocktopia” feels so dated, like a glorified field trip to the local symphony hall for a High Art-meets-Low Art lesson in music appreciation. (The idea of blending rock and Rachmaninoff is not new.)

Maybe it’s the fact that co-creators Randall Craig Fleischer (who’s responsible for the both the arrangements and conducting duties) and Rob Evan (a Broadway vet with a booming baritone) stick mostly to obvious choices, almost entirely from the prog rock era of the 1970s and ’80s. (The most recent tune is Muse’s “Uprising,” which, oddly, is paired with Pink Floyd.)

Maybe it’s the fact that some of Maestro Fleischer’s mashups don’t really work, like Tchaikovsky’s “Romeo and Juliet” overture segueing into Patti Smith’s “Because the Night” or pairing Mozart’s “Eine kleine Nachtmusik” and Styx’s “Come Sail Away.”

Maybe it’s the upstage LED screens, which instead of identifying the classical pieces being performed (they’re not included in the Playbill either), offer the silliest and most on-the-nose visuals imaginable. We get scenes of European castles as Celtic violinist Máiréad Nesbitt leads the New York Contemporary Symphony in a snatch of Mussorgsky’s “Pictures at an Exhibition” (see, you’re hearing classical) and then jump to skyscrapers and urban traffic as Rob Evan croons U2’s “Where the Streets Have No Name.”

And don’t get me started on the parade of heroes projected during “We Are the Champions.” Anne Frank? Babe Ruth? Mother Teresa? Eleanor Roosevelt?

Cynthia Nordstrom’s costumes are a travesty, overworked ankle-length gowns with side leg slits up to the crotch. Imagine what an adult-film star might wear to an awards show to look covered-up and classy, but add a bit of Renaissance fair. (The guys get off easier in basic black, with some sequined bedazzling on their Varvatos-like jackets.)

The lighting design, similarly, seems to be an off-the-shelf package of randomly programmed moving spotlights (tellingly, there is no lighting designer credited).

None of this feels quite at home on Broadway — though I suppose the Shubert Organization would rather book something in the theater rather than leave it empty during the height of the season. But it’s hard to imagine the audience for a glorified concert that has already aired on PBS (based on a 2016 version of the show, recorded in Budapest).

The singers are mostly solid, and there are some genuine highlights, including a stirring vocal duel between Metropolitan Opera alum Alyson Cambridge on Handel’s “Lascia ch’io pianga” and “The Voice” and Broadway vet Tony Vincent on Elton John’s “Don’t Let the Sun Go Down on Me.” It’s a close call as to who displays more diva-like hauteur.

The show also features a “special guest” who picks up lead vocals on a couple songs and gets an encore all their own. For opening night, it was Train frontman Pat Monahan (Twisted Sister’s Dee Snider and Cheap Trick’s Robin Zander are also lined up in April).

But on the whole, this is one classical-rock collaboration that would have more than just Beethoven rolling over.

For the record: A previous version of this review misspelled the name of the Shubert Organization.