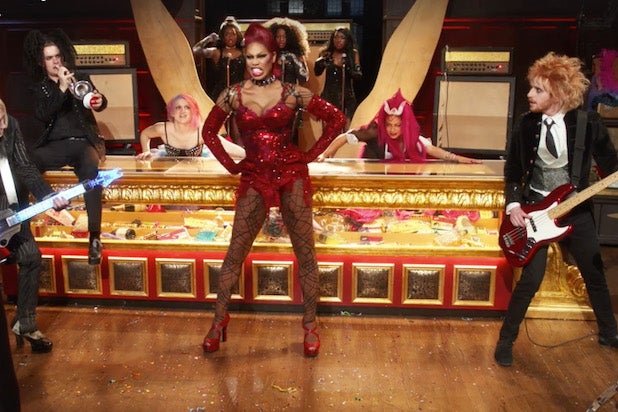 The broadcaster was able to move into the runner-up position in the key 18-49 demographic, but still settled for fourth place among total viewers. The special’s 4.9 million total viewers was far less than “Grease: Live’s” 12.2 million and even “The Passion’s” 6.6 million. To be fair, “Rocky Horror” was not live like the others were, so there was less incentive to tune in the same way.

CBS dominated the night with “Thursday Night Football” — stiff competition for the musical reboot, no doubt.

CBS was first in ratings with a 2.9 rating/10 share in the advertiser-coveted 18-49 demographic and in total viewers with an average of 10.1 million, according to preliminary numbers. The kickoff show at 8 p.m. earned a 2.1/8 and 8 million viewers. itself at 8:30 buoyed CBS’ numbers through the rest of primetime and beyond.

Fox was second in ratings with a 1.7/6, but fourth in viewers with 4.9 million. “Rocky Horror” was the only broadcast on the schedule.

Also Read: 'Rocky Horror' Star Says Tim Curry Is 'Exactly What You Want Him to Be' (Exclusive Video)

Telemundo was fifth in ratings with a 0.7/2, but seventh in viewers with 1.70 million.

Univision and the CW tied for sixth in ratings, both with a 0.6/2. Univision was fifth in total viewers with 1.8 million; CW was sixth with 1.71 million.

Tim Curry's 10 Most Memorable Roles, From 'Rocky Horror Picture Show' to 'IT' (Photos)

TheWrap looks back on the iconic actor's best roles.