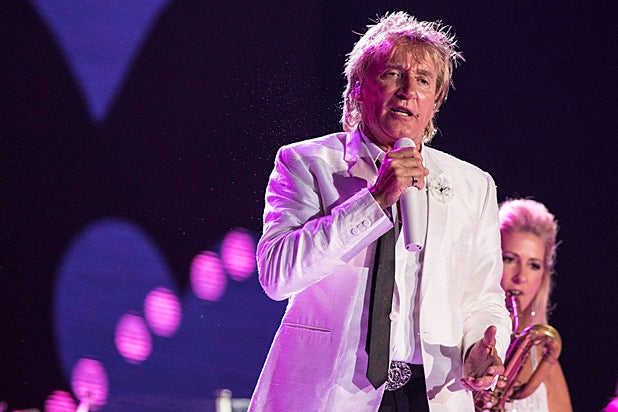 Sir Rod Stewart offered his “deepest apologies” on Friday for causing upset by re-enacting an ISIS-style beheading, claiming he was merely copying “Game of Thrones.”

The now-deleted video clip that was posted on Instagram was filmed in the Abu Dhabi desert before a show in the United Arab Emirates.

It showed the British rocker with his friends trekking through the sand, before Stewart, 72, made a cutting motion across the throat of a man kneeling in front of him.

Watch the video that was preserved on YouTube below.

The footage sparked outrage on Twitter and across global media, with former hostage John McCarthy (who was kidnapped in Lebanon in 1986) telling BBC Radio Scotland that the singer had turned “a grotesque thing into a kind of pantomime.”

However, Stewart claims was just “larking around” and that his actions were misinterpreted.

Also Read: 'The Night Of' Star Riz Ahmed Recounts Being 'Typecast as a Terrorist'

“From re-enacting the Beatles’ Abbey Road crossing to spontaneously playing out ‘Game Of Thrones,’ we were simply larking about pre-show,” he wrote in an apology on Twitter.

“Understandably, this has been misinterpreted and I send my deepest apologies to those who have been offended.”

See some of the tweets criticizing the “Blondes Have More Fun” singer below … some more seriously than others.

Saw 'Rod Stewart Apology' on TV news ticker tape from distance and assumed it was for his career from around 75/76 onwards.

Not the first time Rod Stewart has been involved in a mock beheading scandal either… pic.twitter.com/QopzoJNJcz

Excited to start my first day as Rod Stewart's US publicist. Time to take a huge swig of coffee and see what's in today's news pic.twitter.com/SM1IpRzK0R

Rod Stewart ra Sellik fan re-enacts terrorist killing.mmmm where have i seen that before? Can feel "its not wot it looks like" xcuse comin. pic.twitter.com/0o31jZbtYa

Rod Stewart trending at No.2 on my Twitter. ISIS don't get this much attention when they literally execute people.

"Rod Stewart does not represent us" pic.twitter.com/mWZ2UY0vXs

11 Oregon Militia Memes That Will Arm You With Laughter (Photos)

This user has Oregon covered. A trap with brewskies made in the U-S-A.