On the heels of a well-received profile in Esquire and on the eve of an Oprah appearance in which his own voice (computerized from old recordings) will be heard for the first time in years, film critic Roger Ebert has joined with his wife Chaz to fund a grant that will go to an emerging documentary filmmaker at Friday’s Film Independent Spirit Awards.

The Eberts’ family foundation will fund the unrestricted $25,000 grant for the winner of the Chaz & Roger Ebert Truer Than Fiction Award at the 25th Spirit Awards.

In the press release announcing the award, the executive director of Film Independent, Dawn Hudson, said, "Because Chaz and Roger Ebert are long-time attendees of the Spirit Awards and tireless supporters of independent film, we are especially honored that these two beautiful people are providing an emerging filmmaker with the means to continue making films.” 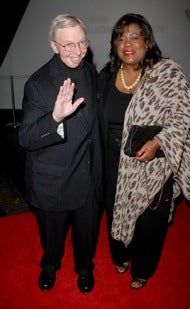 The Truer Than Fiction Award has been given out at the Spirit Awards for 15 years, and has always included a grant to help the recipient pursue a career in the film industry. In the past, sponsors of the award have included IFC, DirecTV and Lacoste.

The Eberts (right, at the 2009 Toronto Film Festival) will fund the award this year; their future commitment has yet to be determined.

Nominees for the award, which is chosen by a special jury, are Natalia Almada for “El General”; Jessica Oreck for “Beetle Queen Conquers Tokyo”; and Bill Ross & Turner Ross for “45365.”

The Spirit Awards take place on Friday night at 8 p.m. Pacific at the L.A. Live event deck in downtown Los Angeles. It will be broadcast live and uncut on IFC, with British comic and actor Eddie Izzard as master of ceremonies.