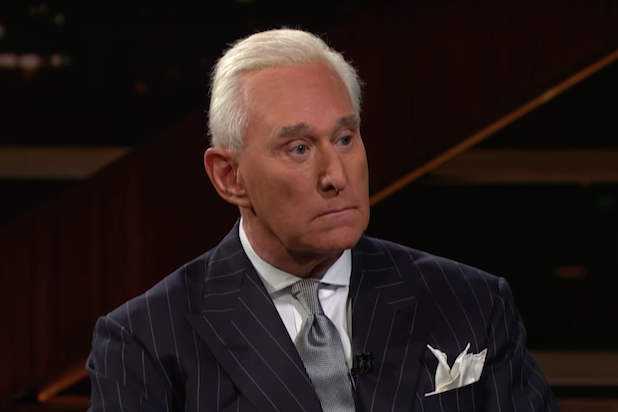 Roger Stone took a swipe at Jake Tapper during a SiriusXM radio interview on Tuesday and insinuated, without support, that the longtime CNN anchor might be gay.

“Jake Tapper looks light in the loafers to me,” Stone said during an interview with Breitbart editor-in-chief Alexander Marlow. The jab came after Tapper said during a panel on his CNN show last week that the Trump adviser “might like” prison — which many at the time took as a veiled homosexual joke.

“I don’t know what implication he’s making about me, but I think most people found the whole thing repugnant,” Stone told Marlow. “What’s the implication there?”

A CNN source tells TheWrap that Tapper was referring to Stone’s love of attention and the spotlight, nothing else.

Stone has long side-stepped questions about his personal life, telling an activist in a video interview in 2017, “Why is that anyone’s business? … I’m trysexual. I’ve tried everything.”

“Why did Jake Tapper insinuate that I was gay and gleefully proclaim that I would ‘like it’ in prison,” Stone told TheWrap on Wednesday. “Nice try attempting to make Tapper the victim. When he apologizes to the LGBT community for his homophobic outburst, I’d consider.”

Tapper, who has two children with his wife of 12+ years, Jennifer Brown Tapper, did not immediately respond to a request for comment.

In the Marlow interview, Stone said that since he became a public face of special counsel Robert Mueller’s investigation into Russian collusion, he and his family had been subjected to nonstop anonymous threats.

“The hatred, the death threats, the threats against my children … I have people call the house and say we know where your grandchildren go to school, and then hang up,” Stone said.

After months of hovering around him, the feds finally detained Stone in a pre-dawn raid of his Fort Lauderdale home last Friday. Stone was formally charged with multiple felonies including five counts of false statements and one count of witness tampering, according to the Washington Post.

CNN was on hand to capture the dramatic moments when more than a dozen heavily armed federal agents descended on the scene. Critics like Tucker Carlson accused the network of being tipped off by the special counsel or the FBI — something CNN has so far not explicitly denied.

You can listen to the full interview between Stone and Marlow here.