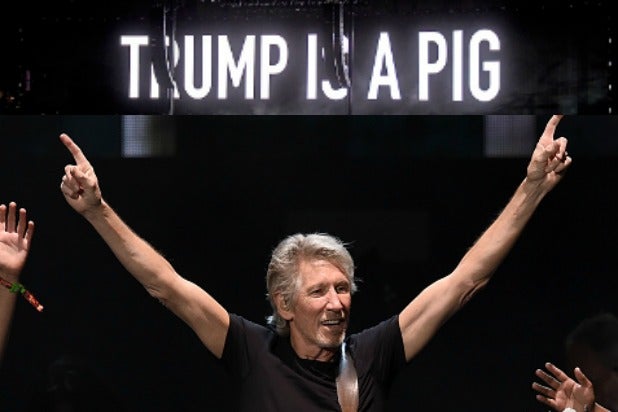 If you’re looking for a conservative-leaning evening of progressive rock, former Floyd frontman Roger Waters’ Us + Them tour may not be such a good idea.

As Waters plays “Pigs (Three Different Ones),” multiple unsavory images of Donald Trump are projected in neon lights in the background.

The images include giant florescent depictions of Trump wearing lipstick and eye shadow, firing a weapon and reclining in women’s lingerie. At one point, the words “Trump Is a Pig” stretch across the stage and, at another, a blimp crosses overhead with Trump’s face and his blackened eye covered with a dollar sign and, in a word bubble, “I won!”

Saturday, CNN’s Michael Smerconish asked Waters if his over-the-top show of disdain for Trump helps rather than hurts him.

“No, I don’t think help or hindering,” Waters answered. “We need to survive his presidency, because it’s totally unpredictable. I don’t think he knows what he’s going to do.”

Waters then added, “This is the responsibility that you and the mainstream media have is to not allow this to be taken as seriously as it is. I mean, I’ve sort of stopped watching all the talking heads about Russia-gate and this and that and the other because it seems to me largely irrelevant. There’s a larger picture that we could maybe all be focusing on.

“The problem,” he continued, “is entertainment has got mixed up with news a lot in this country, my general sense is that everything has to be entertaining. And in consequence Donald Trump is great for the mainstream media because he’s such a buffoon.”

Watch the entire interview below.