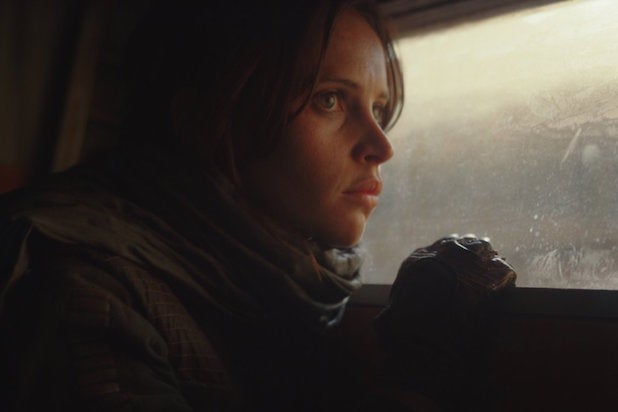 Disney’s Lucasfilm prequel “Rogue One: A Star Wars Story” easily took first place at the box office during its opening weekend, earning an estimated $155 million domestically — just ahead of expectations.

Counting international returns, the hotly anticipated “Star Wars” movie earned $290.5 million globally as it opened in all major territories abroad, except for China and South Korea.

Disney dominated the weekend, as returning animated hit “Moana” came in second place with $11.7 million. (See the Top Five below.)

“Rogue One” started the weekend off at 37 percent lower than “The Force Awakens” debut, which broke records with $248 million in the U.S. and Canada at this same time last year.

The domestic debut of the new “Star Wars” film is the second biggest December opening off all time, behind “The Force Awakens.”

The prequel has an 84 percent on Rotten Tomatoes and a solid A CinemaScore, given by those who graded it on opening night.

It was made for a reported $200 million (not counting marketing costs) and is playing in 4,157 theaters in the U.S. and Canada — which includes roughly 400 IMAX screens and more than 500 Premium Large Format screens.

It made $29.2 million from 708 IMAX screens, globally, making it the second-highest IMAX debut in history — behind “The Force Awakens.” The film earned a massive $19 million on IMAX screens in North America, which counts as the biggest opening of the year for the brand and the second-highest of all-time in the month of December (again, behind “Force Awakens”). The domestic per screen average is also estimated at a massive $47,000.

Other new and expanding titles played in the massive shadow cast by “Rogue One”:

Will Smith’s holiday drama “Collateral Beauty” made an estimated $7 million from 3,028 locations, nearly half of initial estimates of $12 million from both trackers and distributors at Warner Bros.

The New Line release, co-financed by Village Roadshow, also made $4.6 million in 16 international markets, including Russia and Mexico.

The film was produced for $36 million and has a 14 percent on Rotten Tomatoes, though its A- CinemaScore could still prove it has playability through the holidays.

“Collateral Beauty” is something of a modernized “It’s a Wonderful Life,” directed by David Frankel (“The Devil Wears Prada,” “Marley & Me”). It stars Will Smith, Keira Knightley, Edward Norton, Naomie Harris, Helen Mirren and Michael Peña and revolves around a New York executive (Smith) who retreats from his life after suffering a great personal tragedy. He later seeks answers from the universe on the topics of Love, Death and Time.

Liongate’s “La La Land” has expanded to 200 theaters in its second weekend, earning an estimated $4 million. It was made for a $30 million (not counting marketing costs), and the musical starring a singing and dancing Emma Stone and Ryan Gosling debuted to a record-breaking $881,104 last weekend, representing the highest per-location average of all time for five theaters.

Writer-director Damien Chazelle’s lauded musical now boasts a cumulative total of $5.3 million. It also features performances by Finn Wittrock, Sandra Rosko and John Legend. It has a 95 percent on Rotten Tomatoes and scooped up the most Golden Globe nominations of any film this year. It also won Best Film honors from both the New York Film Critics Circle and the Critics’ Choice Awards — among several other awards it has already garnered.

“Manchester by the Sea” has expanded in its fifth weekend, earning an estimated $3.2 million from 366 screens for a total cumulative of $8.3 million.

The Roadside Attractions drama has a nearly perfect 97 percent on the aforementioned reviews aggregation site. It was written and directed by Kenneth Lonergan, who also wrote and directed the widely lauded 2011 drama “Margaret.” He also wrote the screenplay for Martin Scorsese’s “Gangs of New York” and the Robert De Niro comedy “Analyze This.”