Roku hit a new all-time high on Wall Street on Thursday morning, with the device maker soaring 21% in early-morning trading after it reported strong Q2 revenue and account growth a day earlier.

The increase pushed Roku’s stock to $122.35 per share, continuing a meteoric rise that began at the beginning of the year when it was trading at less than $33 per share. Eight months later, Roku’s stock price has increased 275%. 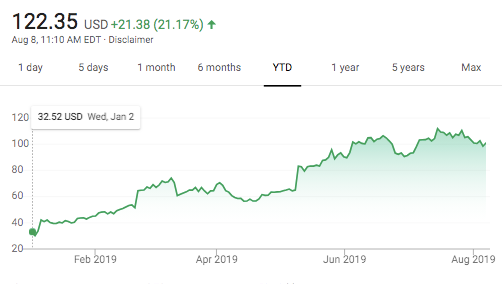 Roku’s Thursday blitz was spurred on by the company reporting its revenue increased 59% year-over-year to $250.1 million — easily beating analyst estimates of $224.2 million in sales — when it shared its second-quarter results on Wednesday. The Los Gatos, California-based company is best known for devices like the Streaming Stick, but its advertising and subscription businesses have continued to grow at a breakneck rate with ad and subscription sales increased 86% year-over-year, which accounted for $167.7 billion in revenue.

The company’s audience is continuing to grow as well, with it tacking on another 1.4 million accounts during Q2 — surpassing the 30 million account threshold in the process.

Roku’s rise has come at the same time cable and satellite providers have experienced record subscriber loses at the hands of streaming services like Netflix and Hulu. With new streaming services from Disney, NBCUniversal and WarnerMedia launching in the next year, Roku executives believe the good times will continue to roll.

“We are excited, to say the least, about the coming services into OTT and believe that we are an essential platform for these new services,” Roku SVP Scott Rosenberg said on the company’s earnings call.