Chris Christie locked horns with Roland Martin on ABC’s “This Week” Sunday, when the former New Jersey governor was called out for his role in bringing Donald Trump to power and, therefore, the establishment of the future character of the Republican party.

The two political analysts discussed Trump’s still strong influence over the GOP even after losing last year’s election. Christie said that by tying themselves to Trump and his continued false claims that the election was stolen from him, Republicans are endangering their long-term viabiilty as a political party.

“I’m on a course to make sure my party remains relevant in the political conversation in this country,” said Christie, who has become one of Trump’s loudest Republican critics as an analyst on ABC’s “This Week.”

Also Read:
Trump Spanked for Absence From 9/11 Memorial Services: ‘Ceremony Isn’t About Him, So Why Bother’

But Martin took exception to this, saying that Republicans have already committed themselves to Trumpism and that Christie cannot completely distance himself from Trump’s rise to power within the party.

The 2016 presidential candidate shrugged off Martin’s comments. “I’ll sleep fine tonight with you judging my morals,” Christie replied. “We all get to make choices, Roland, in this democracy. I made my choice. I’m on record, and I’m not walking away on my choice. But it does not preclude me from being critical when the person I did support does things I’m against.”

Watch the exchange between Christie and Martin in the clip below. 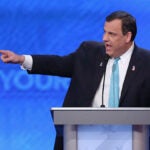